All You Need to Know About: “Blockchain Testing”

All You Need to Know About: “Blockchain Testing” 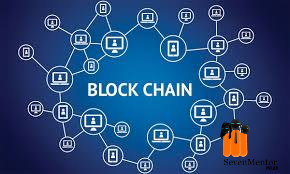 First of all a blockchain is like a distributed ledger which stores the database of assets and transactions done across a peer-to-peer network. You can think of a blockchain as an open infrastructure that can store various types of benefits.

Let me take this to a simpler level. Assume you have to make a transaction of $10 from A to B. Now, in standard scenarios what happens is that transaction takes place through a third part app or payment processing system. First, A’s bank will be identifying the details of B’s bank. Once upon a time, with the help of a payment processing service A’s bank will initiate a money transfer to B’s bank with a certain amount of deductions. Both banks will record transaction at their end. Although, a transaction fees is charged and B receives something like $9.95. This process is a bit secure and have many redundancies in place to make sure that it stays secure and accurate, but even then, there are some basic fundamental issues with the transaction process:

A block once added to the blockchain remains there constantly and if you try to change the data in a few block in between the chain, the following blocks become invalid. A single change in block of the blockchain will generate every subsequent blocks to change as well. This makes it important that whenever a new block is added in the blockchain , it’s being added the right way because it cannot be changed at a later date. It becomes fusion to exploit a blockchain and the testing of blockchain becomes even more complex.

Add to that, it is come up with large transactions which goes through validation, encryption, decryption, transmission, etc. so it becomes mandatory to make sure that these processes goes smoothly.

What all the things that must be tested in a Blockchain?

1.Block Size:  The maximum fixed limit of a block is 1 MB. After the introduction of bitcoin ,the first 18 months average size of a block is came out to be under 30 KB. then in December 2017, it hanged around 1 MB.

2.Chain Size:  In chain size is no limit on the size of the chain. So it is good to test it for its function and performance. For example, the size of bitcoin chain’s keeps on increasing day by day.

3.Load:  With so many people on the blockchain, load becomes a major parameter to test in a blockchain. Let’s take an example of bitcoin. It currently has a maximum throughput of 3 to 4 transactions/second but what if the transaction/second increases as in case of Visa(2000), Paypal(193), etc. Hence load remains the big problem with blockchain as its performance drops when it increases.

4.Security: Since there are many miners involved with a transaction, ensuring security is a little complex. So there is a multi-layered security system in a blockchain. If one of the layers have been hacked, the instantaneous transactions can’t be stopped. It is therefore to be tested that one security layer does not affect the other.

5.Transmission of data: Encrypted and decrypted data is transferred from computer to computer so it is necessary to test if the transmission process is working flawlessly. Is the data being sent received on the other end or there is a leak in between. So it becomes important to make sure that the data couldn’t be lost.

6.Addition of block: Every new block is added to the chain once the transaction’s validity is authenticated. So it should be tested that there shouldn’t be any issue in the block addition system and the block must be added after authentication.

7.Cryptographical data: This is the backbone of blockchain technology. So, it is essential to make sure that the data is properly encrypted and decrypted.

This is just the beginning of Blockchain technology. It has a lot more to show, learn and teach us.

Blockchain is a digital register whose records are stacked together in tiny blocks forming a continuous chain, hence the name blockchain. This digital ledger possesses special attributes that make it unique. For instance, it is decentralized ,that means each transaction is added onto the chain has to be replicated so that each node has the same copy.

Secondly, when you add a record to the chain, you can’t edit or recall it. While these individual features make this ledger special, they also render it complicated. So proper testing ( validation )must be done before deploying a blockchain.

To guarantee trust, testers must ensure that all the components of a blockchain are working fine as well as all applications are interacting with it in a trusted manner. Some of the basic tests that should be run include functional, performance, API, and other specialized tests. So following is the list of testing:

Functional testing. This is a entire process that evaluates the work of various functional parts of the blockchain (e.g. smart contracts).

In blockchain development, which frequently follows Agile methodology and the shift left approach to testing is gaining popularity. Carrying out a series of tests as early in the SDLC as possible allows minimizing the number of defects that could be found in the application lifecycle later on when the impact on a business can be harmful.

Below mentioned are well-known tools for testing blockchain applications:

BitcoinJ is a library for carrying out operations with the Bitcoin protocol. It is a Java-based framework is specially created for Bitcoin-based applications that allow interaction with the actual BTC network along with different testing activities. We don’t required to download the standardized BTC Core files via Bitcoin.com for using this tool. By performing the functions in this library, we can transfer and receive Bitcoins in a real-time setup.

These is another open-source blockchain testing library that is accessible in the form of a Github repository. With clarify setup and controllable API support for different testing requirements, Ethereum Tester can be seen as a most capable testing tool.

Populus framework possesses the testing practicality of Ethereum which is well merged as a set of attributes aimed at testing contract deployment. These framework is principally developed around the py.test framework, thereby, supporting its relatively easy implementation.

Embark is mainly associated with the development of decentralized applications (dApps) which work on different systems. The powerfulness of Embark is highlighted through its assimilation with IPFS, Ethereum blockchain as well as a decentralized communication platform like Orbit and Whisper.

For Ethereum developers, it is a commonly mentioned name that identifies impressive testing features, including automated contract testing. This blockchain testing framework is provided with capabilities that surpass testing functionality, such as working with famous test runners like Chai and Mocha.

This tool is simply built to test Ethereum contracts locally. It creates a simulated blockchain that allows anyone to use many accounts for testing. So the results you get are from a simulation and not a live event, and, therefore, the results will be satisfactory but not perfect.

Hyperledger Composer needs most of blockchain testing features. Therefore, this tool is only useful for testing apps before they are launched.

The three main parts it excels in are 1) interactive 2) automated system and 3) automated unit testing.

Testing the operation of the whole service is the forte of Exonum Testkit. This tool allows to test API and transaction execution in the synchronous system. that is, without the attachment of the network operation and consensus algorithm.

Testing a blockchain is essential to ensure the defects in a decentralized ledger are removed. This eventually protects a business against the negative outcome of blockchain poor operation. There are various blockchain testing tools available on the market, including development frameworks and testing capabilities. The final choice would depend on company development strategy and the test types needed for your app’s uninterrupted functioning.

The confirmation to take on Blockchain technology comes with several inherent challenges because the change in the technology itself is a bit significant. Apart from regular testing and authorization testing such as functional testing, security testing, non-functional testing performance testing, and integration testing, there is a need for specialized testing abilities to actively support the testing teams.

Below mentioned are some of the common challenges linked to Blockchain app testing which should not be ignored by testers. 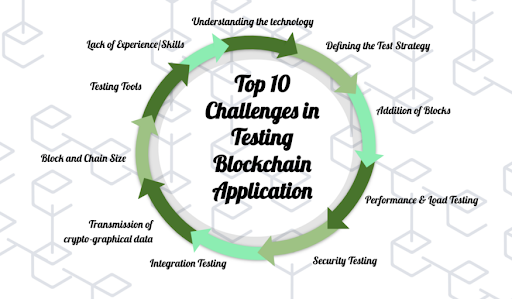 One of the well-known challenges to blockchain testing and development of applications is the inadequate experience with the correct methodology within the Blockchain arena. Gathering knowledge and turning additional skills to incorporate Blockchain applications is no doubt slightly expensive.

If security testing is not sufficient, it can lead to the creation of Blockchain applications that are vulnerable attacks at the user , network level, and mining level.

Minor significance is given to testing when compared to the complete programming process. Such customary results in forming a Blockchain app development domain with less no dedicated testers for investigating and evaluating Blockchain products. Currently, the testing strategy being executed is substandard leading to unproductive Blockchain app testing.

With a clear description of the importance of blockchain app testing and the popular tools involved, you are also informed about the vital challenges related to the blockchain testing process.