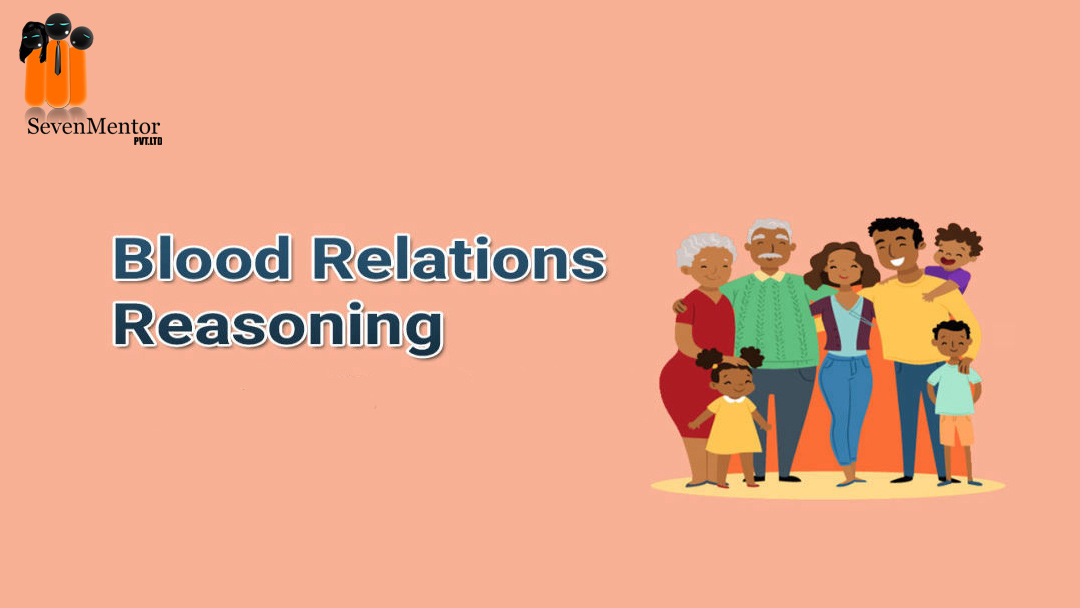 Blood relationship test forms an important part of the reasoning section in most of the competitive exams. In Blood relation problems the different relations among the members of a family may asked. According to the information given, you are required to find the relations among/between particular members of the family.

For solving blood relation problems we should be focus on two things i. e.

To get success in the test, you should be familiar with all blood relations which are discussed in tables below:-

Table: 1 Display the relationships for grandmother and grandfather.

Table: 2 Display the relationships for Father, uncle, Mother and aunt.

Table: 3 Display some other important relationships.

Example: Introducing Rohan, “Reena Said Brother’s father is the only son of my grandfather” How is Rohan related to Reena?

Is this example Break the sentence from of and solve as follows:

The only son of my grandfather –Reena father.

Hence, from both the parts answer is father, therefore, father of Reena and Rohan is same, both are brother and sister. Thus, Rohan is Brother of Reena.

In this keep my, my self in place of James, then you find your mother brother is your maternal uncle. Therefore answer is uncle.

From the figure we can see that Neha aunt husband daughter is Neha cousin.

Note: For solving Blood relation problems we can use any of above Tricks.

Type 1: Based on Conversion.

In this types of questions, a conversion is made Introducing to a person. You need to decode the statement to find the relationship between the concerned persons. It can be better understood by following examples.

The only son of my mother means Raman himself, therefore boy is the son of Raman. Hence, Raman is the father of boy.

Rohan’s grandfather’s only grandson = Rohan only.

Therefore, the lady being pointed at is the wife of Rohan.

Type 2: Based on Puzzles.

In these type of questions, a blood relation is specified between two or more persons. You need to analyse the given information and make a relation chart. In the question related to puzzles, you may also be asked to count the number of males and females members in the family.

There are six members in the family namely P, Q, R, S, T and U. R is father of Q but Q is not female. R and P are a married couple. The sister of Q is U .The Brother of R is T.S is the daughter of P.

From the above figure R and P Husband and wife, has three children.

R (male) and P (female) are married couple in family.

As we see in the figure T is the brother of U’s Father R. he will be the uncle of U .therefore we can say that u is the niece of T.

In figure P is the wife of R and T is the brother of R, Thus T will be the brother-in-law of P.

Explanation: P, U and S are the female member in the family.

Type 3: Based on Coded Relations.

In these types of coded relations, Symbol such as +,-, @,*, ©, ®, ×, ÷, =, etc. are used to representing the relationship between two persons. You need to analyse the codes and answer the questions accordingly. It can be understand better by the following example.

Question: Directions (1-5): Use the information given below to solve the questions that      follow.

Where, + sign represent male, x represent undefined means we don’t know the gender of Q it can be Son or daughter but for the statement P+S=Q it is clear that P is the brother of S who is the father of Q. Therefore, P is the uncle of Q.

From the Above figure we can say that Z can be also the child (Son or Daughter) of X, i.e. X is the father of Y and Z.

S *Z means S is the sister of Z

From the above figure we can say that V is the father or mother of Z, T and Z is sons and S is the daughter of V. Thus, T is son of V.

Therefore from above figure we can conclude that Y is son of Z and X is son of Y, Thus, X is Grandson of Z.

As we don’t know the gender of Z, therefore Z can be uncle or aunty of T.