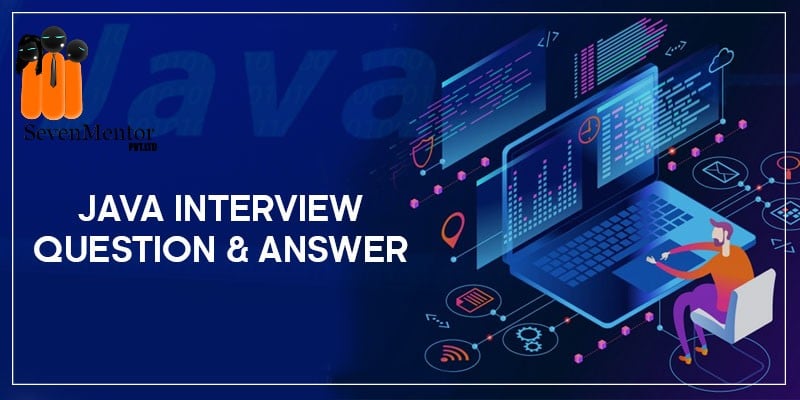 Dear Students, in this blog from Java Training In Pune,  I am discussing the most commonly occurring interview questions on Core java. While preparing for interviews one of the most important for student is technical preparation. Sometimes you will get direct questions and sometimes twisted questions so today I will discuss them.

Platform is a environment where software is running. Java provides software based platform.

Platform can be hardware based, software based.

There are two types of data types Primitives and non primitives

The variables which are declared using static keyword is known as static variables.

JDK is java Development Kit. It is software for creating and running java programs. Currently jdk16 is running.

Because of Byte Code java is Called write Once Run Anywhere. Because Compiler converts into Byte Code (.Class File).

Class Loader is used to Load the Class. It is a sub System of JVM. When we run a java programs the first thing is class Loader. Three built-in class Loaders in JVM.

No. Compiler   does not have any default value.

In java, based on Scope of variable. Variables are 3 types

The Scope of  Local Variables  inside a method only.

Yes we can overload  main method  . the compilation start from main only. Because JVM  understands public static void main (String [] args) only.   Main  method  is  entry point  for program.

Pointers   are  not  safe(unsafe).Pointers   are  complicated  for  beginners . Java focuses  on  Code  Simplicity. So  java  does not use  pointers.

JIT   is   Just  in Time . It  is translator  of source Code  to  machine  executable code.JIT  is  Part  of  JVM.It  will  improvers  the  code performances.

In java  there  are  four(4) loops. While loop, for loop, do while loop, enhanced for loop.It  is  also  called for each loop.

For each loop   is mainly used   to access the objects   and Arrays. It is very simplified one. Where you can declare variable, no need   for condition and increment / decrement variables. It is used to iterate only arrays and objects only. In for Loop we need to declare variable, writes condition, and write increment, decrement based on logic

Syntax of both Loops

What   is  constructors   in java?

Constructor  is  a  special  method  that  get  executed   when we create a  objects   of  a class. It  is  used   to  initialized  the  instance  variables.

There  are  two types  of constructors  in  java.1) Default constructor2)Parameterized constructor.

How  to create a  anonymous  object   in  java?

what   is  super keyword?

We  can create  arrays   of  objects in  java. Because   in java  array  is  objects. For  example

After creating  arrays of  object  we can  initialize   like this

Package  is  Collection  of  classes, interfaces,and subpackage. Package  will  provides  the  encapsulation where  all classes   are  Placed  in  one  folder. Package  provides manage ability. Multiple   Packages   can  have  same class name. Package Provides access protection. In java there  are  two  types  of packages  Built in package , user defined Package. Package  is  used  for  easy  maintenance

How to run a package   using command prompt?

Package  can be  run using   command prompt  also . we  can write javac –d  packagename, (this is  for  compilation). To run a package we use   java packagename.classname.

What    is this keyword in java?

This is a keyword in java. In a class if you have   ambiguity between member variable and parameter of a constructor or a method you can use this keyword. This keyword always refers to current class member variables (instance variables).

How to invoke   a parameterized constructor from   default constructor?

What are wrapper classes?

In java  there  are  8 Wrapper classes. Which converts  object  to  primitives .

The   automatic     conversion   of primitives data type     to objects is known as Auto Boxing which happens automatically.

Here  x   is  converted  as  Integer object  i.  Which will happen automatically   is called auto boxing.

In order to declare constant in java. We  can  use  a final keyword. Final keyword makes variable as a constant. We  can ‘t  change  its  value. We   can declare variable  as  a final  variable  as a static  variable. One rule   for  final keyword  is  we need  to  initialize  it. Un initialized  final  variable  is  known as  blank  final variable. If  we  make  any variable  as   final  its  value  does not  changes. We cannot override final method which will stop inheritance. Ask to the industry experts of Java Classes In Pune for more information by calling them.