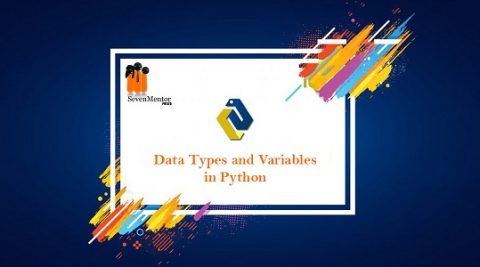 Python is one of the most famous programming languages nowadays. It has gained its popularity due to its simplicity and eases to use. Python has reduced no. of lines of code a lot, thus simplifying learning and implementation of python for practical use.

Also, python is platform-independent (means once code is written in one platform, it will get executed on any platform without making any changes) and dynamically typed language (Means the datatype of the variables is decided by an interpreter at the time of execution).

Developers want to focus on the implementation part rather than spending time writing complex programs. This is where Python is very useful due to its rich library functions.

This is where python provides reliable and easy access.

Basic concepts are the foundation of any programming language and hence in this blog, we will learn the concept of variables and data types in python.

Following are the topics covered in the blog:

As the name suggests variables are the values that vary.

When we perform coding in python, we need space to store values in the system. In a programming language, a variable is a memory location where you store a value. The value that you have stored may change in the future according to the specifications.

A Variable in python is created as soon as a value is assigned to it. It does not need any additional commands to

declare a variable in python. In fact, we don’t declare variables in python, we directly initialize them. Thus the work of variable declaration has been reduced for programmers.

There are certain rules and regulations we have to follow while writing a variable, let’s take a look at the

variable definition and declaration to understand how we declare a variable in python.

Python has no additional commands to declare a variable. As soon as the value is assigned to it, the variable is declared, and it’s the responsibility of interpreter to allot the datatype to the variables.

#variable is declared as the value 10 is assigned to it.

There are certain rules that we have to keep in mind while declaring a variable. These variables are as given below:

We will further discuss data types in python in detail.

Variables we declare in python has a data type. In python, all Data types are classes and variables are the instances of these classes.

According to the properties, there are mainly six data types in python. Although there is one more data type range which is often used while working with loops in python.

# it will be the integer as long as the value is a whole number.

Boolean is used for categorical output since the output of boolean is either true or false.

#num is the boolean variable

#the output will be bool

#this will print true.

Strings in Python are used to represent Unicode character values. In Python we do not have a character data type, a single character is also considered as a string.

We denote or declare the string values inside single quotes or double-quotes. To access the values in a string, we use the

#this will give you the output as ‘v’

Strings are immutable in nature, which means you cannot change a string once replaced.

#this will make the letters to uppercase

#this will make the letters to lowercase

#this will replace the letter ‘e’ with ‘E’

#this will return the strings starting at index 1 until the index 4.

Now that we have understood numbers and strings, let’s understand the relatively complex data types.

The list is one of the four data types that we have in python. When we are choosing a collection type, it is important

to understand the functionality and limitations of the collection. Tuple, set and dictionary are the other collection data type in python.

A list is ordered(forward and backward index is maintained) and changeable (ie. mutable), unlike strings. We can add duplicate values as well. To declare a list we use the square brackets.

We use indexes to access values from a string.

#this will get the values from index 2 until index 6.

#this will replace the value at index 6.

#this will add the value at the end of the list.

#this will add the value at the index 5.

Other operations that we can perform on a list are the following:

count():   returns the number of elements of the specified value

index():   returns the index of the element

pop():      removes the element from the specified position

remove(): removes the item with the specified value

#this will return 30 as output.

A tuple is a collection which is unchangeable or immutable. It is ordered and the values can be accessed using the index values. A tuple can have duplicate values as well. To declare a tuple we use the round brackets.

#to count the number of elements

#the output will be 2

#to find the index

Since a tuple is unchangeable once you have declared it, there are not many operations you can perform on a tuple. But there is a bright side to using a tuple, you can store values in a tuple which you do not want to change while working in a project.

Although you will be able to access the values, there will not be any changes to be made.

A set is a collection which is unordered, it does not have any indexes as well. As set do not maintain index, so it does not support indexing and slicing.

A set in python is declared using the curly brackets ie {}.

A set does not have any duplicate values, even though it will not show any errors while declaring the set, the output will only have distinct values.

To access the values in a set we can either loop through the set, or use a membership operator to find a particular value.

for x in myset:

#this will get all the values.

#this will  return true if the value is in the set.

#to add a value in a set

#to remove an item from a set

#we can use the discard or pop method to remove an item from a set as well.

#this will return false

#this will return a set with the union of the two sets.

symmetricdifference():  returns a set with the symmetric difference

Let’s take a look at another collection data type which has key-value pairs.

#this will give the output as ‘tensorflow’

#this serves the same purpose to access the value.

Since we are using the keys to access the items, they cannot be duplicate.The values can have duplicate items.

Data Manipulation in a dictionary

Other operations in a dictionary include the following.

update()           updates the dictionary with all the key-value pairs

setdefault()      returns the value of a specified key

Range is a data type which is mainly used when we are using a loop. Lets take an example to understand this.

Now that we have understood different data types that we have in python, there is another important concept of typecasting

which is helpful when we change from one data type into another. Let’s understand the concept of typecasting.

Type casting basically is the process of changing one data type into another. We have constructors for each of the data types in python.

Let’s understand this with an example.

#to change this list into a tuple i can simply write

Using these constructors we can use various data types with the functionality of the other. Suppose we declare the list mentioned

in the example as a tuple in a program, it will become immutable for that particular operation. Similarly we can use other constructors as well.

Now that we have discussed variables and data types in python. I hope the properties of each data type and the operations are clear to you.