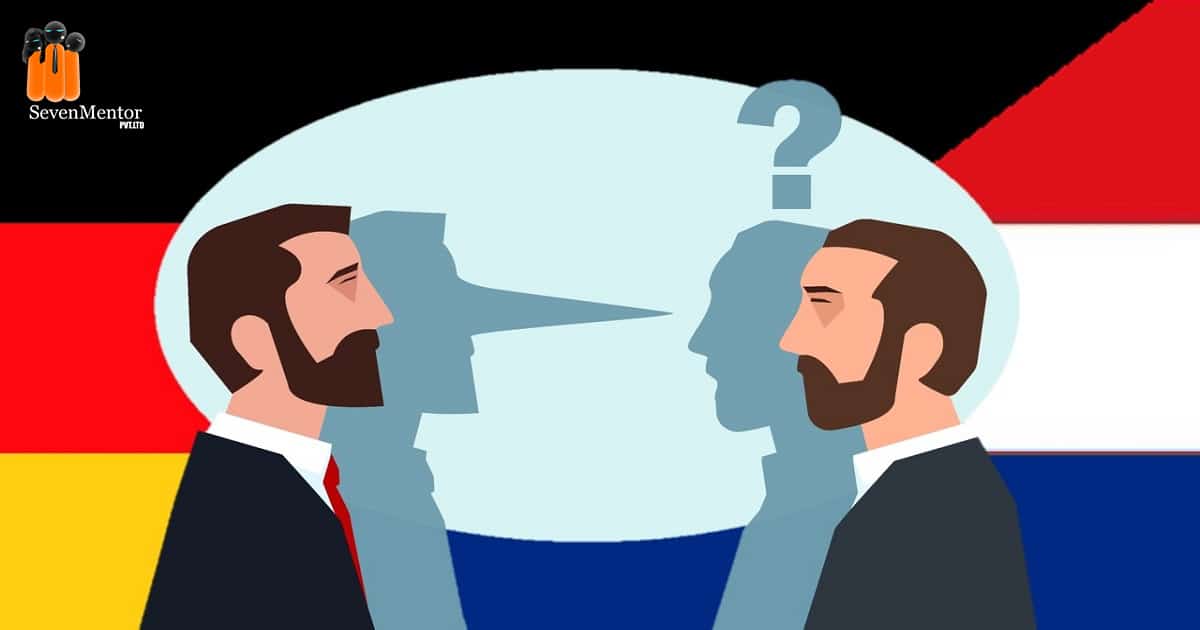 In our lives, we don’t believe individuals who say they’re our friends but in reality, we know they aren’t, so we label them as fake friends. Similarly, when we’re learning a new language from German Language Classes in Pune, we come across terms that act as false friends in the language, and we shouldn’t trust them before knowing their usage!

In the study of language, ‘false friends’ are terms in two languages that appear similar or sound similar when said out loud but have fundamentally distinct meanings. They are especially troublesome for students learning a new language since they are prone to infer the meaning of the term based on a similar word in their native language, resulting in inaccurate understanding or usage.

False friends have evolved in numerous languages over time for a variety of reasons. For example, in certain circumstances, the two false friends have similar beginnings, maybe because they were both taken from a third language, but their meanings have diverged through time. In other circumstances, the terms may have distinct origins, but due to gradual shifts in pronunciation and spelling, they have both ended up appearing or sounding identical.

Thus attempting to infer the meaning of these seemingly familiar foreign terms in German writings rather than utilizing a dictionary might lead to major misunderstandings. There are many terms in German that appear or sound similar to those in English, but they have different meanings in each language.

German and English, both are West Germanic languages that share numerous vocabulary with similar linguistic roots and borrow words from each other. Furthermore, both of these languages have a large number of loanwords from Latin and French, as well as other languages. These frequent terms make learning German simpler for English speakers, but they may also be a cause of difficulty as their meanings differ in each language. Some false friends in English and German have a minor overlap in semantics, which might lead to further issues, while others have wholly distinct, even opposing connotations. As a result, German students must learn to discern between real and false friends with the help of German Language Course in Pune, and the only way out is to memorize the common ones in regular usage.

There are several reasons why certain terms with similar etymologies in German and English have different meanings. Some old Anglo-Saxon terms, for example, may have lost their original meaning and gained a new one in one language while retaining their original meaning in another. Similarly, certain loanwords from a third language (for example, French) may have kept their entire meaning in one of the languages while their meaning has been changed or they have only one of their numerous original meanings in another.

Furthermore, several English loanwords in German have changed in meaning and gained a meaning that is distinct from the original English term, whilst other English words were developed by Germans (excellent examples include ‘das Mobbing’ or ‘das Handy,’ which is a noun in German). Pseudo-anglicisms are the German terms for fabricated English words. Some of them, such as mobbing, have become so popular that it is now used by many native English speakers when discussing workplace harassment.

In addition to words having common origins, there exist words that are spelled or pronounced the same in German and English but have wholly different etymologies and hence completely different meanings. Unsuspecting beginners may be confused by many small German terms that appear regularly in texts while looking or sounding like English. These small bogus pals, on the other hand, should not be a serious issue for advanced German language learners. These are some of them:

The German preposition ‘vor’ means ‘before’ or ‘in front of,’ whereas the English equivalent ‘for’ is ‘für’ in German.

While the German conjunction ‘weil’ means ‘because,’ the English word ‘while,’ which has a similar pronunciation, is equal to the German ‘während.’

Wer vs. Wo: The German pronoun ‘wer’ is identical to ‘who,’ whereas the English word ‘where’ is translated as ‘wo’ in German.

Even skilled German learners may be unaware that they are misinterpreting certain German terms that seem familiar. This is especially true for terms that sound similar to foreign words they are familiar with but have a different meaning. It can take years of practice to recognize them naturally unless they learn them from the experts of German Language Training in Pune.

Another example of this is the term Rat, which means advice or council in German, which leads to the word Rathaus, which means town hall. The correct term for a rat is die Ratte, which is similar but has an extra syllable.

So there’s an easy-to-correct example of a straight false cognate, but as you learn additional words, they get harder to correct. The most difficult aspect of German false friends, as opposed to other languages such as French or Spanish, is that they are frequently written identically to their English counterparts. This can make them even more crucial to remember, especially if the definitions are similar to those in the prior example.

Wondering about how you can learn these deceptive sentences when they all appear so similar to or even identical to other English words?

The simplest way is when learning a German term, it’s better to completely separate it from its English equivalent. This may be accomplished simply by speaking the word with an exaggerated German accent. So, instead of saying “Rat,” pronounce “der Rah-tt,” emphasizing the ah sound and adding the article der for good measure. So, don’t be deceived by their seeming likeness, recall the majority of these German-English fake pals. Remember that there are hundreds of more perplexing English soundalikes in the German lexicon. When learning a new German word, always grab a dictionary if you’re unsure.