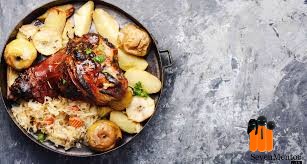 Each and every part of the country has its own origin of cuisine. Let’s see the different patterns and famous dishes in Germany. There are also the local and regional food trends. The Food in Germany reflects the Federal History of Germany. Sometimes they also include the cuisine culture of their neighboring countries. So Germans have various food and food patterns. There are some traditional and seasonal dishes which are particularly made in the specific season and Festivals. Germans consume more meat with green veggies. They are also very fond of the pulses. They prefer more potatoes, meat and also pork with more amounts of leafy veggies. There are regional variations in Food. German foods reveal the origin of German culture, what the Germans like. They are very particular about the Seasonal food. Germans are very used to the Bakery products and they prefer to bake it by themselves. They keep their food simple but healthy. Understand more about it with German Language Classes in Pune.

Germans tie all the regional delicacies together to form a great food in all traditional ways. They have their meals divided into 4 meals that are Breakfast, Lunch, cake and coffee and last Dinner. In breakfast, early morning they include bread with some spreads like cheese, jam, hams and nutella with some fresh juices or cup of coffee. They usually prefer to drink coffee without milk or sugar. They do their breakfast a bit heavy to keep their start of the day fresh. At Lunchtime they include veggies and bread or some kind of meat or sausages. Germans consume a lot of Bread into their meals. At mid-evening they have some snacks which includes a cup of Coffee with some cookies and a piece of cake which they bake at home. For Dinner they prefer to have some light food like muesli, salads or sometimes rice, soups. Germans prefer to eat different Salads for all meals. They don’t add more species of food and sweets into their meal. They also add the seasonal fruits to their meals and make juices from fresh fruits.

Let’s dive into some Street and local food in Germany; there is plenty of street food which is very delicious.

There must be many fancy restaurants around Germany but street food has its own charm and satisfaction. Street food is quite popular in Germany; it offers some delicious street food for mid-day snack, lunch or dinner. From hot to cold, savory to sweet, traditional German snacks to modern twist snacks, you will not be disappointed with Germany’s wide range of street food, at a reasonable amount. The country has many snack food stands (Imbisshallen) or food trucks. Berlin is said to be the street food capital of Germany. There are numerous annual street food festivals held throughout the year, in cities such as Cologne, Hamburg, Düsseldorf, Berlin, Mainz and Munich. You cannot miss some traditions in Christmas Markets and Oktoberfest as well. Some of the ‘must try’ street foods of Germany are Döner Kebab, Currywurst, Bratwurst, Flammkuchen, Buletten, Kumpir, Leberkäse, etc. If you don’t have much time to have your meal in a restaurant, you can simply pick up some tasty traditional German street food and save up so much of your time and money too!

In German Cuisine, Bread is a very important part, one of the reasons being various types of cereals such as wheat, rye, oat, barley, etc are native to Germany. Another is, creative thinking and high standards of the German bakers. There are around 300 types of bread in Germany. Traditionally, in Germany, bread is served with two of the meals, for breakfast and for evening snack. In Germany, bread is rarely served as a side dish, except for soups.  Just to name few of the most popular breads in Germany are Rye-wheat (Roggenmischbrot), Wheat bread (Weißbrot), Whole-grain (Vollkornbrot), King Ludwig, Pretzel (Brezel), Berliner, Sunflower seed in rye bread (Sonnenblumenkernbrot), etc. Mostly, sourdough made from wheat and rye flour is used to make bread in Germany. Different wholeseeds such as linseed, pumpkin seed, poppy seed, sesame seed, chia seed or sunflower seed are added while making bread. Vollkornbrot is typical bread used in German cuisine.

Germans also are very fond of popular Turkish food. It is very famous and favorite Food. There are many dishes like Doner ,Lahmacun,Pide,Sigara Borek,Dolma,Gozleme,Simit,Baklava and many more. They have also taken Turkish cuisine into their traditional cuisine.

Germans are also very fond of Indian Food. There are many restaurants who offers traditional Indian dishes with the origin of spices. Chicken Korma, Butter Chicken,Chicken curry ,Tandoori Chicken are most popular food liked by the Germans. There are also the pure vegetarian Indian food hotels with basic most liked Paneer Tikka, Dal ,Rice  with Rotis and Naans. Learn more at German Language Course in Pune.

Germans consumes more Beverages both Alcoholic as well as non-alcoholic :

In hot beverages , coffee and tea are consumed more. around more than 1000+ flavours of coffee originated in Germany.Coffee are drinked mostly at mid evening. They also add fresh fruit juices to their meals.Germans kids drink milk daily in morning with some add on likes Chocolate powder or honey .it tastes especially good when it is hot. Delicious milkshakes are also added to the adults with adding some ingredients.

In Mineral water, Germans drink two types of Water which is Sparkling water it’s like a soda water and the normal tap water. Some drinks are specially dinked in Summer Like Punsch, Schorle , Ice Tea to refresh summery days .

Beer is the most important part of German culture.There are many types of Beers like  Weissbier, Marzen,Schneider Weisse, Gaffel Kolsch, Tannenzapfle.

etc. Germans consume more amount of Beer including the Festivals. Germany ranks third worldwide where it comes to the consumption of drinking beer 28 gallons per capita. German beers have a tremendous craft brewing culture. The most popular festival which is known as Oktoberfest it’s also called as Beer Festival where the Beer is the main element. There is also a low tax for Beer in Germany according to the Americans. Wine and beer are the most important part of living. In Germany it is legal to freely enjoy the drinking of Beer and Wine after the age of 16.

I would like to end this blog with sweet thought in German Language Training in Pune, the Desserts which are most loved by Germans like Marble cake,Schnecken,Schwarzwälder kirschtorte,Erich Ferdinand ,Berliner or krapfen, Quanthem Bienenstich, AndreasWeber,

Lebkuchen,Apple strudel etc. Blackforest cake is the most famous and most loved cake in the World.