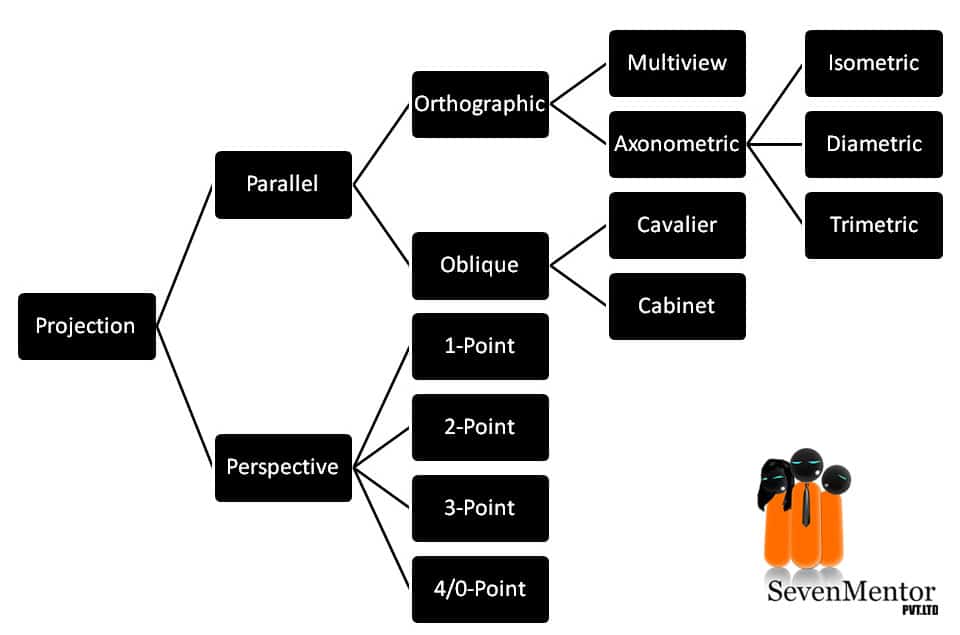 In its entirety, the most sought outfield of engineering is Design Engineering and down these lines, you will get the essence of the statement above as you read through.

Long before modern designing techniques in late 14th century, pioneers in the field of designing had no more tools than their own mind and bark of a tree or a piece of paper that they could inscribe their ideas and imagination of figures which we now still marvel upon thinking “How did they do that?”. The only answer that can best answer this question is the one-word ‘Perspective’.

Design Engineering’s foundation lies in the point of view of an object (or an objective, metaphorically) which is further strengthened by the tools we have that help bring out the best narratives of our imagination.

Design Engineering involves the utilization of two things Drawing & Drafting. Design Engineers work upon the objects or components per se and how they are comprehended from different viewpoints. Their work depends majorly upon how complex a design of an object can get.

Therefore, engineers have to look into all the possible angles and figure how are the objects projected on a plane.

If straight lines are drawn from various points on the contour of an object to coincide a plane, the object is said to be projected on that plane. The figure obtained by joining, in correct sequence, the points at which these lines meet the plane, is called the projection of the object. The lines from the contour of the object to the plane are called projectors.

Graphical projection is a protocol where an image of a 3D object is projected onto a planar surface without any numerical calculation.

In engineered drawings below mentioned four methods of projection are usually used, they are:

The proportion of the length of two-line sections on a line remains unaltered. As a unique case, midpoints are mapped on midpoints.

Points, as a rule, are not safeguarded. Yet, right points with one line parallel to the projection plane stay unaltered.

Any figure in a plane that is parallel to the picture plane is harmonious to its picture.

In the event that COP [ Center Of Projection] is situated at infinity, every one of the projectors is parallel and the outcome is a parallel projection.

Parallel projection is utilized in drawing objects when the point of view projection can’t be utilized.

In order to understand more about Parallel Projection in detail, let us start with its types; Orthographic & Oblique Projection.

In orthographic projection, the bearing of projection is typical to the projection of the plane.

There are three sorts of orthographic projections −

In Isometric Projection, the most generally utilized type of axonometric projection in building drawing, the bearing of survey is with the end goal that the three tomahawks of room show up similarly foreshortened, and there is a typical point of 120° between them. As the twisting brought about by foreshortening is uniform, the proportionality between lengths is protected, and the tomahawks share a typical scale; this facilitates the capacity to take estimations legitimately from the drawing. Another preferred position is that 120° points are effectively built utilizing just a compass and straightedge.

In Dimetric Projection, the course of review is to such an extent that two of the three tomahawks of room show up similarly foreshortened, of which the specialist scale and points of introduction are resolved by the edge of survey; the size of the third bearing is resolved independently. Dimensional approximations are normal in dimetric drawings.

In Trimetric Projection, the heading of review is to such an extent that the entirety of the three tomahawks of room show up inconsistent foreshortened. The scale along every one of the three tomahawks and the points among them are resolved independently as directed by the edge of survey. Dimensional approximations in trimetric drawings are common, and trimetric point of view is only occasionally utilized in specialized drawings.

Oblique projection is a kind of parallel projection: it anticipates a picture by converging parallel beams (projectors) from the three-dimensional source object with the drawing surface (projection plane).

Sideways drawing is likewise the crudest “3D” drawing strategy yet the most effortless to ace. One approach to draw utilizing a slanted view is to draw the side of the article you are taking a gander at in two measurements, for example level, and afterward draw different sides at a point of 45°, yet as opposed to drawing the sides full size they are just drawn with a large portion of the profundity making ‘constrained profundity’ – adding a component of authenticity to the item. Indeed, even with this ‘constrained profundity’, slanted drawings look unconvincing to the eye. Hence, diagonal is once in a while utilized by proficient architects or specialists.

In Cavalier Projection (now and then unceremonious viewpoint or high perspective) a point of the item is spoken to by three facilitates, x, y, and z. In the drawing, it is spoken to by just two directions, x″, and y″. On the level drawing, two tomahawks, x and z on the figure, are opposite and the length on these tomahawks are drawn with a 1:1 scale; it is in this manner like the dimetric projections, despite the fact that it’s anything but an axonometric projection, as the third hub, here y, is attracted corner to corner, making a discretionary edge with the x″ hub, typically 30 or 45°. The length of the third pivot isn’t scaled.

The term Cabinet Projection (once in a while bureau point of view) originates from its utilization in representations by the furniture business. Like a dismissive viewpoint, one face of the anticipated item is parallel to the survey plane, and the third hub is anticipated as going off at an edge. In contrast to high handed projection, where the third pivot keeps its length, with bureau projection the length of the previous lines is sliced down the middle.

In perspective projection, the good ways from the focal point of projection to extend plane is limited and the size of the item changes contrarily with the separation which looks increasingly practical. The separation and edges are not protected and parallel lines don’t stay parallel. Rather, they all join at a solitary point called focal point of projection or projection reference point. On the off chance that COP[ Center Of Projection] is situated at a limited point in 3 space, the outcome is a viewpoint projection.

In perspective projection, questions that distant seem littler, and objects that close seem greater, while parallel projection might be best for structural drawings, in cases wherein estimations are fundamental viewpoint projections require a separation between the watcher and the objective point.

There are 3 kinds of point of view projections which are appeared in the accompanying outline.

One-point Perspective Projection is easy to draw. A drawing has a one-point perspective when it contains just one evaporating point not too far off-line. This sort of point of view is regularly utilized for pictures of streets, railroad tracks, lobbies, or structures saw with the goal that the front is legitimately confronting the watcher. Any articles that are comprised of lines either legitimately parallel with the watcher’s viewable pathway or straightforwardly opposite (the railroad braces) can be spoken to with a one-point viewpoint. These parallel lines unite at the disappearing point.

Two-point Perspective Projection gives a better impression of profundity. A drawing has a two-point viewpoint when it contains two disappearing focuses seemingly within easy reach line. In an outline, these evaporating focuses can be set self-assertively along the skyline. The two-point viewpoint can be utilized to draw indistinguishable items from one point of view, turned: taking a gander at the side of a house, or at two forked streets contracting into the separation, for instance. One point speaks to one lot of parallel lines, the other point speaks to the next. Seen from the corner, one mass of a house would subside towards one evaporating point while the other divider retreats towards the contrary disappearing point.

Three-point Perspective Projection is most hard to draw. Three-point viewpoint is regularly utilized for structures seen from above (or beneath). Notwithstanding the two evaporating focuses from previously, one for each divider, there is currently one for how the vertical lines of the dividers subside. For an item observed from over, this third evaporating point is underneath the ground. For an article seen from beneath, as when the watcher gazes toward a tall structure, the third disappearing point is high in space.

Three-point viewpoint exists when the point of view is a perspective on a Cartesian scene where the image plane isn’t parallel to any of the scene’s three tomahawks. Every one of the three evaporating focuses relates with one of the three tomahawks of the scene. One, two and three-point viewpoints seem to exemplify various types of determined viewpoint and are created by various strategies. Scientifically, notwithstanding, every one of the three are indistinguishable; the thing that matters is only in the overall direction of the rectilinear scene to the watcher.

Four/Zero-point Perspective View– This is a curvilinear adaptation of a two-point viewpoint and can give an all-encompassing or a 360° view, as the quantity of evaporating focuses outperform the least required sum. In less complex terms, the vertical lines rising up out of a two-point viewpoint sketch which meets at the disappearing focuses would now get bent at the VPs. This kind of projection can be seen both vertically just as on a level plane, and when seen vertically, it depicts a bird’s-eye view, and simultaneously a subterranean insect’s eye-see as well. In this projection, four disappearing focuses are similarly dispersed, two not too far off-line, and one above and beneath, to characterize four vertically-drawn lines at a 90° point identified with the skyline line.