Java Vs Kotlin – Which Programming Language to Choose?

Java Vs Kotlin – Which Programming Language to Choose? 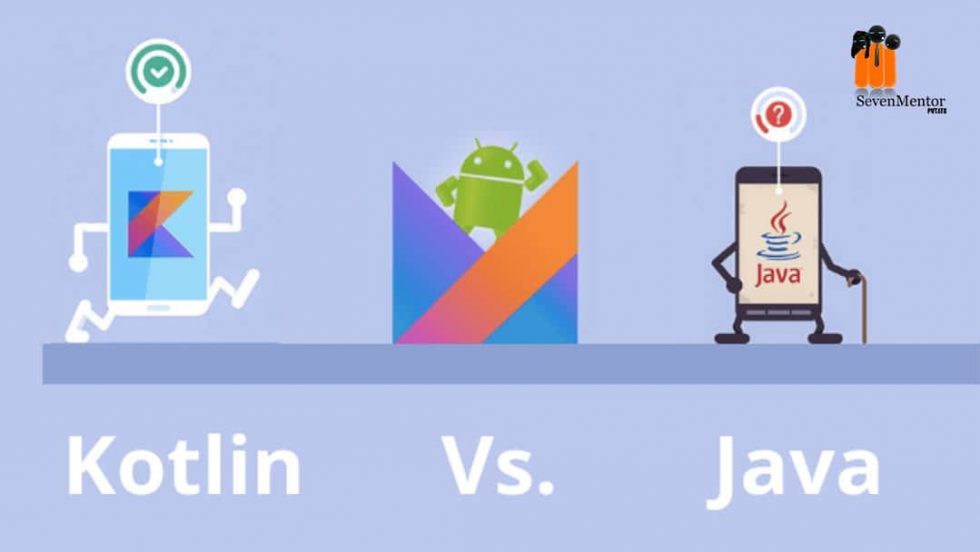 Java Vs Kotlin – Which Programming Language Should You Choose For Android Development?

When we think of Android development, we have two Android Programming Languages available in the market namely Java and Kotlin. Now the biggest question arises is which language we should choose to start learning, in order to be an Android developer. In this blog, I have tried to cover all the necessary parameters you should consider while making the decision. To start your career as an Android developer you can join Java Courses in Pune, along with Kotlin language. Learning Kotlin with SevenMentor is the best combination. To view all details please go to Kotlin Training Institute in Pune. Let’s get started with our blog.

For those who have experience with Java and are able to read and understand Java code written by others, it’s a good idea to start learning Kotlin directly. You can also write your future Android projects in Kotlin. As a developer, You will have a lot of fun and appreciate the more concise code and increased productivity. There is a huge possibility that Kotlin will be the primary programming language for Android in the future. Day by day More and more apps will be written in Kotlin, which means that there will be a lot of Android jobs that will require Kotlin skills.

Kotlin’s program can be compiled to Java bytecode. Because of this Kotlin is 100% interoperable with Java. This allows us to gradually add pieces of Kotlin code into our existing Android Java projects. We can also call Java methods from Kotlin.

As Kotlin language is developed by JetBrains, Kotlin has first-class support in IntelliJ IDEA and Android Studio. It is possible to use it without adding any plugins, and you get proper code-completion, syntax highlighting, debugging and refactoring tools, and other features.

Why learn Java before Kotlin?

There are many Java tutorials out there than Kotlin tutorials.  Almost all Android problems on pages like StackOverflow from the last years have been written in Java. Most of the documentation of Android is in Java and if you start with Kotlin right away, this can make the learning process very difficult and confusing.

To understand the syntax of any language is easy, but for the actual building of apps, you have to learn how to use the different frameworks and library APIs. For development, you have to learn what classes you have to use and which methods you have to call. To achieve this you need practice and a lot of examples you can refer to. Having  Knowledge of the syntax of a language is actually secondary. But when you refer Kotlin tutorial you will find that most Kotlin tutorials compare Kotlin to Java occasionally to point out its advantages, making the learning process even more confusing. So if you want to learn Android development right now, it’s impossible to avoid Java.

Kotlin has solved many of Java’s pain-points and increases productivity by reducing boilerplate code, many things of what Kotlin does makes more sense when you have some knowledge of how Java works.

Java is more important when you might decide to work in a field outside of Android later. Out of all the codes used today a lot of code is written in Java. Thus getting a whole team to adopt a new language is challenging also rewriting working code usually not worth the investment. Because of it, a programmer will spend most of the time fixing and extending already existing systems rather than writing completely new software from scratch.

What is Kotlin? What is its importance?

Kotlin is a programming language that is statically typed(Means the datatype of a variable is decided at compile time). Kotlin is used for Java Virtual Machine (JVM) and JavaScript. Kotlin language was born out of the aspiration for heightened productivity. Kotlin Training in Pune with SevenMentor is the best combination for your future Android career.

Kotlin has official support from Google. It was declared the official language for mobile development by Google in May 2017. In 2017 when Android Studio was released, Kotlin was included as an alternative to the standard Java compiler.

If we want to talk about the importance of this language, Kotlin is the most strongly supported JVM language in the Android ecosystem, aside from Java. When we use Kotlin we can write significantly less code as compared with Java. Fewer lines of code imply smaller file sizes for Kotlin, compared to Java equivalent. Go through

Java is one of the oldest languages. Java has been at the top for more than two decades and it is still a popular programming language. As we all know Java is an object-oriented programming language developed by Sun Microsystems, which was later purchased by Oracle. Java does a lot more than just developing  Android applications.

Now that you’ve understood what is Kotlin and what is Java. Let’s further discuss the parameters to compare Kotlin & Java.

Let’s compare Kotlin and Java, based on various parameters:

Kotlin: Kotlin provides inbuilt null safety. The  NullPointerException is largely responsible for Android development mistakes. In  Android Null is mainly used to represent the absence of a value, but it can easily destroy an application. Kotlin has easily solved this problem by incorporating inherent null safety. Because of this addition, many developers are saved from writing extra code to work around the issue.

Java: If we are using Java then Java does not support Null safety as this was incorporated in recent updates.

Kotlin: Code development speed is fast when it is developed in Kotlin.

Kotlin: In Kotlin we can use Lambda expressions which are anonymous functions that can be treated as values. We can pass them as arguments to methods, return them, or do any other thing that we would do with a normal object.

Kotlin: Kotlin language has limited learning resources as it is a small and new community.

Java: As Java is older, stable and vast programming language so the community circle is bigger than Kotlin.

Advantages of Kotlin over Java

Kotlin language is interoperable with Java, which means that we can use all existing Java libraries, JVM, and the frameworks in Kotlin.

This reduces the amount of boilerplate code in your project.

For those developers who know Java learning Kotlin is very easy.

The compilation speed of Kotlin is slower as compared to Java in most cases, even though it does beat Java in a few instances.

The Kotlin community is smaller and is still young and the learning resources are limited. Because of this  finding answers to problems can be a little difficult. But along with its growing popularity, the resources and community of Kotlin will expand in time.

As Kotlin is new in the market, finding experienced developers for your team can be a little difficult. Everyone who is using Kotlin is still just learning and experiencing it.

Out of all available features, some of the features of Android Studio like auto-complete and compilation tend to run slower in Kotlin when compared with Java.

Is Kotlin going to replace Java?

Now, the most frequently asked question, is Kotlin going to replace Java? The answer is no. Kotlin has powerful features and so does Java. Both Kotlin and Java bind together to treat us with more improvised versions. So, Java and Kotlin will go hand in hand for android development.

The conclusion is that even though Kotlin is the new big thing, it is reasonable to start with Java and then learn Kotlin later on. When we look at the market situation Java is still more widespread and it is hard to find a job with only Kotlin skills right now. Java is a battle-tested programming language. As Kotlin and Java both work hand in hand and are 100% interoperable, you can start implementing Kotlin into your existing Java projects. Once you have some hands-on experience with Java, learning Kotlin as an additional language will be pretty easy and will add value to your profile. You won’t need to start from scratch. To learn Java from experts you can join Java Classes in Pune and once you are done with Core Java you can start Kotlin Course in Pune with SevenMentor.