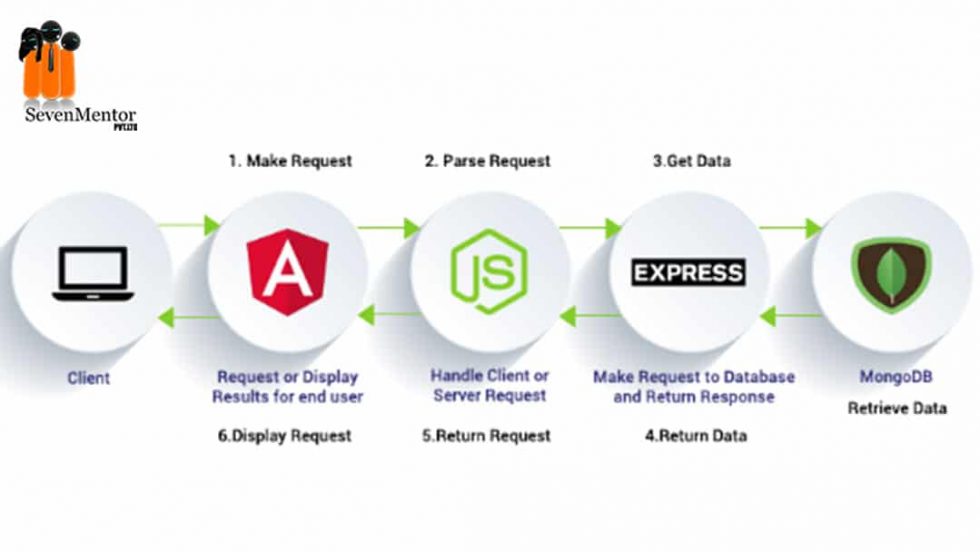 What is MEAN Stack?

We will start with the introduction to MEAN, and then we will dive deep into it for understanding what MongoDB, Express.js, Angular.js, and Node.js are.

MEAN is a collection of technologies (MongoDB, Express.js, Angular.js, and Node.js) associated with JavaScript, which is used to build web-based applications. MEAN stack is responsible for the development of each component of website development from client-side/server-side to database handling, and all these are based on one technology, i.e., JavaScript.

If we want to build a dynamic website, then MEAN stack is an ideal choice for us and the reason is simple: MEAN is user-friendly. On top of it all, the technology of MEAN stack is open-source, i.e., free to use; with the help of MEAN stack, we can make prototypes for our website very quickly and organize our website easily.

Technologies That Come Under MEAN

MongoDB is written in C++ and it is an open-source, multi-platform database. In MongoDB, the storage of data (in key-value pairs) is more flexible than the other databases, and here the type of data stored is binary like JSON.

MongoDB is a document-oriented NoSQL database, i.e., the fields can vary from document to document and the data structure can be changed over time. A document in MongoDB resembles an object in OOPS.

If we are having large tables with a huge amount of data (up to millions), then we can manage them easily with the help of MongoDB. Inserting new fields to MongoDB is very easy because it won’t update the entire table if we insert new data fields, which makes MongoDB an ideal choice for a database system. Moreover, with MongoDB, we can build a whole web application by using just one scripting language, JavaScript, and that’s the biggest advantage of all.

The first version was MongoDB 1.2.x, after which MongoDB has released 13 more versions, including the recently released version 4.2.

When we start working on MongoDB, it is always recommended to install the latest version of MongoDB.

How does the code look like in MongoDB query?

In the above code, we are saving the username and the password. To access them further, we are using find()query, which gives us all our saved data.

Till now we have learned ‘What is MongoDB?,’ what its different versions are, how to write a MongoDB query, and also the live execution of a query in MongoDB. Moving ahead in the blog, we will learn why we should use MongoDB.

Below are a few reasons as to why one should start using MongoDB:

Moving ahead, we will see the differences between MongoDB and RDBMS. Although there are many other databases like SQL, PostgreSQL, etc., as of now, we will compare MongoDB with RDBMS since it is one of the most used structured databases.

Differences Between MongoDB and RDBMS

So far, we have learned all about MongoDB.

What is Express js?

Express.js, a mature, flexible, and lightweight server framework, is used for the server-side applications. Express is also written in JavaScript. To provide support for templates, it uses the Pug engine (one of the most popular templating engines).

Express is a framework for Node.js.

In this blog, now, we will check out some of the core features of Express.js.

Core Features of the Express.js Framework

Why should we use Express.js?

In the process of learning Express.js, so far, we have seen ‘What is Express js? its core features, and why we should use it.

Since we have completed understanding the second technology of our stack, now, we will move toward the third one, i.e., Angular.js. What is Angular js?

Angular.js is a JavaScript framework created by Miško Hevery. It is an open-source framework maintained by Google. It is mainly used to introduce the MVC architecture in the browser-based applications that make the development and testing processes easier. Angular helps us in creating a smarter web app that supports personalization.

Angular is a UI framework for dynamic web applications that allow its users to use HTML as a template language. It helps users extend HTML’s syntax to express the components of their application. We won’t be required to write plenty of code in Angular which is an important feature provided by it.

Angular provides all those features that we expect from HTML. It is specifically designed for the UI development of web applications. For static documents, HTML is a great declarative language, but it does not have that much content which is required for creating web applications.

After the release of Angular js, the problem of impedance mismatch between dynamic applications and static documents got resolved with the help of its features. Let’s further see the features of Angular.js.

Angular as a Complete Client-side Solution

All the AJAX glue code that we have written and the DOM (Document Object Model) elements are handled by Angular and it keeps them in a properly structured way. This feature of Angular makes it opinionated about how a CRUD (Create, Read, Update, and Delete) application should be built.

Angular has everything such as data binding, basic templating directives, form validation, routing, deep linking, reusable components, and dependency injection, which are required to build a CRUD application. It has the property of testability story which includes unit-testing, end-to-end testing, mocks, and test harnesses.

The purpose of building Angularjs was to make a belief that declarative code is better than imperative when it comes to building user interfaces (UIs) and wiring software components together. Meanwhile, the imperative code is excellent for expressing business logic.

Some Important Features of Angular

Till now, in the path of learning Angular.JS, we have seen ‘what is Angular.js?,’ different problems that were resolved after the introduction of Angular, and some of the important features of Angular. Moving ahead, we will have a look at how we write codes in Angular.js.

After the release of Angular, it has come a long way. In this blog, now, we will be familiar with the different versions of Angular and see which among them is better and how in detail.

Let’s now look at the versions available in Angular.

In the path of learning the different technologies included in the MEAN stack, till now, we have learned about MongoDB, Express.js, and Angular.js. Now, we will move on toward our final component in the stack, Node.js. We will see ‘What is Nodejs?,’ the use of Node.js in the MEAN stack, and how the code looks like in Node.js.

Nodejs is a server-side JavaScript execution environment that allows users to create web servers and build web applications on it.

Nodejs is lightweight and efficient because it uses a non-blocking and event-driven I/O model.

In this modern world, web applications have enhanced themselves and come a long way over the years by introducing many popular frameworks such as Bootstrap, Angular js, etc. One thing common in these technologies is that all of these frameworks are based on the popular JavaScript framework.

Why should we use Nodejs?

Why is Node.js so famous? Before the release of Node.js, mostly all web applications were based on a stateless request-response framework. It used to make the work of developers tougher because, in order to ensure that the web session state is maintained, they always had to be sure that the right code has been written in the right place while users were working with the system.

But this issue got sorted out with the release of Node.js as now the users can work in real-time and they can have 2-way communication with the server.

What are the features of Node.js?

Node.js is asynchronous, and hence we call it Node.js async. It is an event-driven Input/Output which helps to handle simultaneous requests. With this feature, if some Input/Output operation receives a request in Nodejs, then Node.js will keep the execution of the operation in the background and the other request processing will continue without any interference.

The important part of this code is the ‘function(error, data)’ function, which is known as a nodejs callback function. Let’s see what happens in this code; the code starts reading the file in the background. After the completion of the reading, this undefined function will be called, and the message ‘Welcome to node.js’ (here) will be printed to the display.

The engine used by Node js at the run time is the V8 JavaScript Engine, the same engine that Google Chrome uses.

If we have less amount of CPU time but want a high level of concurrency, then using Node.js would be a preferable choice.

When should we avoid using Node.js?

If an application requires a long processing time, then we should not use Node.js. The reason for this is, Node is structured to be single-threaded. So, it won’t be able to process any other requests if a single application requires some long-running calculations in the background.

Some of the Big Brands Using Node.js

As we have known all the components of MEAN stack, now, we will know why we should learn it.

It is a complete package. Moreover, if we are well versed with JavaScript, then it is very easy for us to develop a whole website, and we do not need to learn different languages for website development. Thus, learning MEAN stack increases job opportunities.

As it is clear from the above image, when a client makes a request, it is received by AngularJS as it is responsible for the interaction with the client. Once the client makes the request, Angular sends it to NodeJS, which will handle that request further.

Now, Expressjs comes into the picture, which makes APIs. After that, MongoDB retrieves the requested data and returns the response back to Express JS.

Expressjs will now return the data to Node Js, which in turn will return the data back to the client through Angularjs. This way, AngularJS displays all the details fetched from MongoDB.

Advantages and Disadvantages of MEAN Stack

First, let’s look at the advantages of the MEAN stack:

Let’s now look at some of the disadvantages of MEAN stack:

Who is a MEAN Stack Developer?

Scope of a MEAN Stack Developer

If we are trying for a career as a MEAN Stack Developer, then knowing the future of this technology is key for us. Because we need to be open to acquire the varying skill sets as per the need of the hour and must have the experience of working with different technologies and web applications to become a successful MEAN Stack Developer.

There are unlimited growth and scope for web development, which is the best career prospect today. In a recent survey, it was found that almost 23,000 jobs are getting created per month.

While concluding this blog on MEAN Stack, let’s summarize the facts that we have learned so far regarding MEAN Stack.

A MEAN Stack Developer is the one who works with all the four technologies to develop web-based applications, and he/she needs to work on both frontend and backend applications.