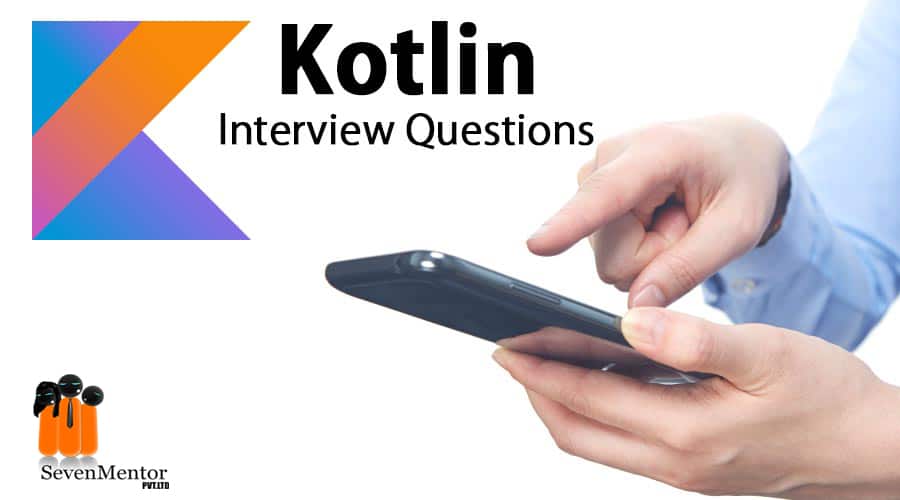 The new age Kotlin is  latest JVM programming language from the JetBrains. Kotlin was made the official language for Android Development along with Java by Google. Developers say it addresses the issues faced in Java programming

Below are Kotlin Interview Questions and Answers that will help you in your Kotlin Interviews. The Kotlin interview questions given below are good for beginners as well as experienced programmers. Coding questions are also included too to brush up your coding skills.

Ans: The Target Platform of Kotlin is Java Virtual Machine(JVM) . Kotlin and Java are 100% interoperable since both, on compilation produce bytecode. Thus Kotlin code can be called from Java and vice-versa.

Ans: We have two major differences between Java and Kotlin variable declaration:

The type of declaration

Declaration in Kotlin, begins with a val and a var followed by the optional type. The type can be automatically detected in Kotlin.

The following is possible in Java:

Variable declaration given below is not valid in Kotlin.

Ans: A lot of weight is put behind null safety by Kotlin which is an approach to prevent the dreaded Null Pointer Exceptions by using nullable types which are like String?, Int?, Float? etc. They acts as wrapper type and can hold null values. A nullable value cannot be added to another nullable or basic type of value.

In Kotlin we need to use safe calls to unwrap the Nullable types of basic type. After  unwrapping, if the value is null we can choose to ignore or use a default value instead. To safely unwrap the value from  the Nullable the Elvis Operator is used.

Ans: The properties of val are set at runtime by default.Just by adding a const modifier with val would make the variable compile-time constant.

It is not allowed to use a const with a var or on its own.

On  local variable const is not applicable.

Ans: Function main is the entry point of every Kotlin program. Kotlin gives us the freedom to choose not to write the main function inside the class. On compiling the JVM implicitly encapsulates it in a class.

The strings passed in the form of Array<String> are used to retrieve the command line arguments.

Ans: !! is used to force unwrap the nullable type to get the value. If null is returned as value, it would lead to a runtime crash. Thus a !! operator is used when you’re absolutely sure that the value will not be null. Otherwise, you’ll get the dreaded null pointer exception. On the other hand, a ?. is Elvis Operator used to have a safe call.

The lambda expression can be used to let on the nullable value to unwrap safely as shown below.

The let expression of Kotlin is used for a safe call to unwrap the nullable type.

A function’s return type is defined after the :

We can declare kotlin functions at the root of the Kotlin file.

== : Compares the values are equal or not

=== : Check for references if they are equal or not.

public is the default visibility modifier.

Constructors in Kotlin are of two types:

Primary – Defined in the class headers. They cannot hold any logic. There’s only one primary constructor per class.

Secondary – They’re defined in the class body. Delegation to the primary constructor is must if it exists. They can hold logic. There can be more than one secondary constructors.

We use the symbol $ to add variables inside a string.

Using {} we can compute an expression too.

By default, the constructor arguments areval unless explicitly set to var.

We can instantiate a class in the following way:

In Java, to create a class that stores data, you need to set the variables, the getters and the setters, override the toString(), hash() and copy() functions.

In Kotlin we need to add the data keyword on the class and all of the above would automatically be created under the hood.

Therefore, data classes will save us with lot of code.

It creates component functions such as component1().. componentN() for each of the variables.

Destructuring Declarations is a smart way to assign multiple values to variables from data stored in objects/arrays.

Within paratheses, we’ve set the variable declarations. Under the hood, destructuring declarations create component functions for each of the class variables.

The function inline  are used to save memory overhead by preventing object allocations for the anonymous functions/lambda expressions called. Instead, it provides that functions body to the function that calls it at runtime. This will increase the bytecode size slightly but will save a lot of memory.

infix functions on the other are used to call functions without parentheses or brackets. This will make, the code looks much more like a natural language.

The modifier lateinit is used with var and is used to set the value to the var at a later point.

lazy is a method  in Kotlin or we can say lambda expression. It’s set on a val only. The val would be created at runtime when it’s required.

For the creation of static method in our class we use the companion object.

Following is the Java code:

It is not possible to use above-mentioned types at langauge level. But compiled JVM bytecode does certainly have them.

when is the equivalent of switch in Kotlin.

To represente the default statement in a when the else statement is used.

print(“value is in neither of the above.”)

when statments have a default break statement in them.

An object cannot have a constructor set. It is possible to use the init block inside it though.