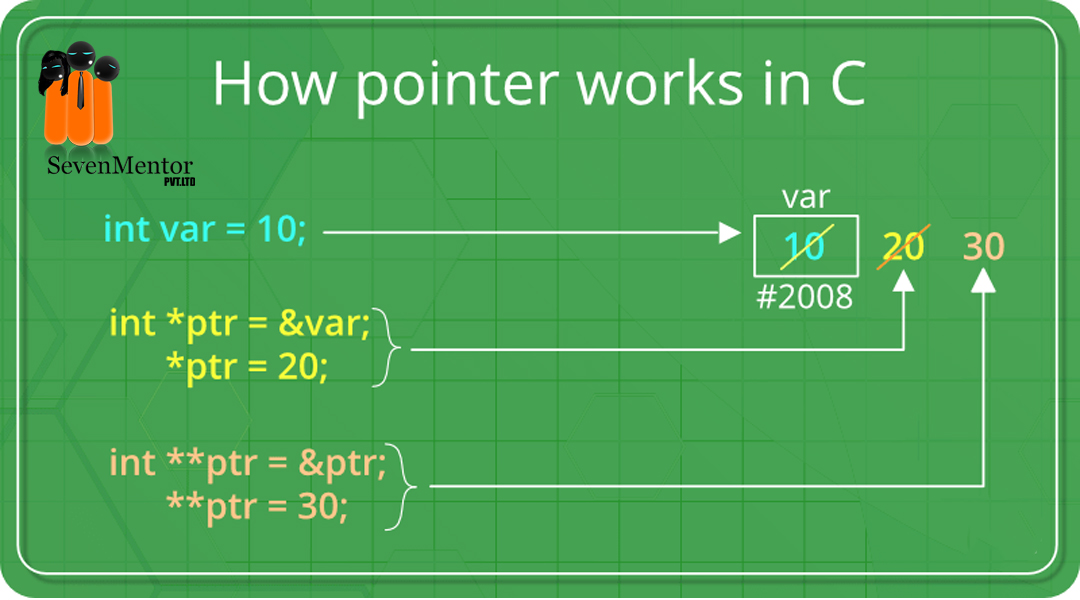 Pointers stores the address of variables or a memory location.

Above example states that:

//An example pointer “ptr” that holds

// address of an integer variable or holds

// address of a memory whose value(s) can

// be accessed as integer values through “ptr”

We must understand the following operators to use pointers:

Pointer Arithmetic
Following arithmetic operations can be performed on pointers.

A pointer is incremented by address. eg *ptr is pointed to location 1000 after ptr++, its value is 1002. Depends on compiler its address is varied by 2 bytes or 4-bytes.

Array Name as Pointers:
The array name is work as an internal pointer which stores address of the first element of the array. It can be used interchangeably.

Because it is less time consuming and more efficient. Though if we can pass the address of each element of the array to a function as an argument but it will be more time-consuming. So it’s better to pass the base address of the first element to the function

We know that a pointer points to a location in memory and therefore it is used to store the address of variables. When we define a pointer to pointer. It means pointer stores the address of another pointer.

Declaration of  pointer to pointer in C?
We have to place one more ‘*’ before the name of the pointer.
Syntax:

In string the variable name of the string e.g. char str[], str holds the address of the first element of the array i.e., it points at the starting memory address.

We can create a character pointer ptr which store the address of the string str variable in it.

In above example *ptr holds the address of first character of str.Accessing string via pointer

If we want to access and display  the elements of the string we can use a loop and check for the \0 null character.

// move the ptr  to the next memory location

Using the pointer to store string:

We can create a character pointer that points at a string value stored at some memory location.

t++; // increment the t pointer with next memory location

What is a structure pointer?
We can have a pointer to a structure. In  pointer to structure, members of structures are accessed using arrow ( -> ) operator.

A dangling pointer has occurred where memory has been allocated dynamically for a variable and after using the memory is freed, but when the pointer is reused if it is still pointing  to the previous location, then it is called as dangling pointer

i).void pointers cannot be dereferenced. It can be done by using typecasting the void pointer

ii)Pointer arithmetic is not possible on pointers of void due to lack of concrete value and thus size.

NULL Pointer is a pointer which is doesnot have nothing to point .If we don’t have address to be assigned to a pointer, then we can simply use NULL.

// p is not a wild pointer now

What are near, far and huge pointers?

These are old pointer concepts which is used in 16-bit intel architectures not much use anymore.

Near pointer: This pointer is used to store 16-bit addresses within the segment. We can only access the 64kb of data at a time.

Huge pointer: This pointer is also used to store 32-bit address and can access outside segment as like far pointers, but in case of far-pointer, a segment is fixed. Whereas far pointer, the segment part cannot be modified, but in Huge pointer, it can be modified.

What is a memory?

Memory is nothing but where we store data that should be processed by the Processor. But this does not mean that it is a single component. It is a collection of several components.

Main-Memory is nothing but  RAM stands for Random Access Memory. It needs electrical power in order to maintain the information. So, we called it as a Volatile-Memory.

What is Dynamic Memory Allocation:

The memory allocated to the program could be divided into four categories.

As we know that variable plays an important role in programming. And allocating memory to variables should be handled by the programmer.

There are three types of memory allocation techniques

Static Memory Allocation is nothing but when we declare a variable and each variable has a fixed size and memory is allocated at the starting point of the program and it gets free after the program finished its’ execution.

For example, Let’s think that we want to allocate memory for a user_input which we don’t have to put a limit. As we don’t know how much memory the user_input needs it, in that case, we use Dynamic Memory Allocation. It means memory is allocated during run time. Let’s see another example to understand better.

As we know that  C is a structured language, it has some fixed rules for programming. One of them is changing the size of an array. An array is a collection of the same type of data which stored at contiguous memory locations.

For Example, we want to add or insert 5 elements in an array where only 5 elements are needed to be entered in this array. In this case, the remaining 4 indices are just wasting memory in this array. So there is a requirement to lessen the length (size) of the array from 9 to 5.

Let us see another situation. In this situation, there is an array of 9 elements with all 9 indices filled. But there is a need to enter 3 more elements in this array. In this case, 3 indices more are required. So the size of the array needs to be changed from 9 to 12.

This procedure is called as Dynamic Memory Allocation.

Therefore, Dynamic Memory Allocation can be defined as the size of a data structure (like Array) is changed during the runtime or else we can also say that memory is allocated during run time.

C provides some functions to achieve these tasks. There are 4 library functions provided by C defined under <stdlib.h> header file to facilitate dynamic memory allocation in C programming. They are:

malloc() means memory allocation which is used to dynamically allocate a single large block of memory with the specified size. This returns a pointer of type void which means a pointer of any type.

Suppose, here the size of int is of  4 bytes, the above statement states that it will allocate 400 bytes of memory. the pointer ptr which holds the address of the first byte in the allocated memory.

calloc() means contiguous or continuous allocation function which is used to dynamically allocate the specified number of blocks of memory of the specified type. It initializes each block with a default value 0.

As per the above statement, it allocates contiguous space in memory for 25 elements each with the size of the float.

where ptr is reallocated with new size.

How does free() get to know the size of memory to be deallocated?

Consider the following example, a prototype of free() function which is used to free the memory allocated using malloc() or calloc() or realloc().

We have to note that the free function does not accept size as a parameter. Then question is that, How does free() function know how much memory to free by given just a pointer?

Why pointer concept did not use in java?

Some reasons for Java does not support Pointers:

It would be impossible for the Virtual Machine to ensure that code containing pointer is safe without runtime checks.

Supporting pointer in Java is not more secure because they point to a memory location or used for memory management that loses the security as we use them directly.

We can use pointers to manually and allocate blocks of memory which is useful for applications like gaming applications, device drivers, etc. but for Object-Oriented programming. Instead of that Java provides Garbage Collection which takes care of memory management.

Drawbacks of pointers in c: