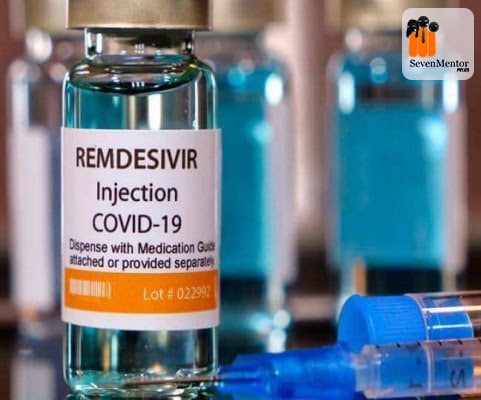 Can Remdesivir Prove To Be  Superior To Placebo??— A  Statistical Understanding

Let’s see statistically why Remdesivir Injection proved to be so effective during the second wave.  In India we have encountered the deadly second  wave, We as a generation have not seen anything like that before but Medical Science and people related to  Medical Science had not left any stone unturned.

Firstly I want to use this blog as a medium to thanks  all the frontline workers, all the doctors, nurses, social  workers etc.

We all have heard about the Remdesivir Injection, we  all have seen the shortage of this injection in our country, this made me curious to know “Why  Remdesivir proved to be so effective, What statistical tests were performed on the people?” While Researching about the Remdesivir Injection, i  found a very interesting paper published in National  Library of Medicine and this was the final report on  this injection by the National Institute of Allergy and  Infectious Diseases.

I have posted the link of this final report.

Remdesivir for the Treatment of Covid-19 – Final Report –  PubMed

Our data show that Remdesivir was superior to placebo in  shortening the time to recovery in adults who were… pubmed.ncbi.nlm.nih.gov

So Let’s discuss in detail what they have exactly  done.

Can Remdesivir prove to be superior to placebo in  shortening the time to recovery in adults who  were hospitalized with Covid-19 and had evidence of lower respiratory tract infection??

Before going ahead, lets discuss what is placebo

Initially they randomly choose 1082 patients obviously  with their consent to perform certain tests, let me  describe the simple test to you.

From the above table, you can see that there are in  total 1082 patients, firstly we divided these people into  2 sets.

SET-B HAS 541 PATIENTS WHICH WERE GIVEN  PLACEBO INJECTIONS.

Before going down, placebo injections are simple  injection filled with water so those patients thinks that  they had been given medicine. It is just to create a  physiological comfort to patients.

Now for each 541 patients in both the sets, their  recovery time has been observed.

Unfortunately there will be people who never  recovered or died, so for them xi will be infinite.  Also x1, x2 are the patients which were given  Remdesivir.

One question would be that why are we not taking  means to get the average?

Now for that you need to understand the nature of  mean, mean simply sum up all the observation and  then divide it by number of observation.

MeanP=y1+y2+y3……y541/541 (FOR SET-B)  Now let’s say unfortunately one person could not  recover from corona and died, now for him, the  recovery time will be infinite.

Mean for that person will be Infinite as we are just  taking the sum of observations. So for this reason  Median Proved to be one of the good metric.  There also could be other metrics or test statistics for  this problem.

Now as you can see above, Median is ((n+1)/2)Th  observation when n is odd, here n is the number of  observations.

By same approach we can find median for even  number of observations. 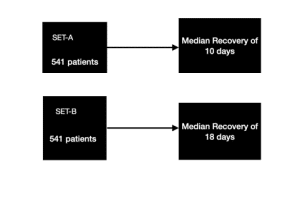 Now what they have found is that Median for SET-A is  10 days, means on average people who were given  Remdesivir were recovered in 10 days.

Median for Set-B is 18 days, means on average  people who were given placebo were recovered in 18  days.

Now There could be one conclusion that, the median  time for Remdesivir is less means it’s actually working  on human body and reducing the time of recovery in  humans.

But the answer will be “NO”. Because just by this  small sample size we can’t conclude that Remdesivir will  be effective for the whole population, if samples goes  here and there, this result could easily be tampered.  NOW WHAT TO DO THEN???

There could be multiple tests for solving this problem  but one common technique is Hypothesis Testing.  Let’s Understand the basic intuition of Hypothesis  Testing.

There are basically 4 parts of Hypothesis testing-:  • Defining Null Hypothesis.

The Null hypothesis is a typical statistical theory  which suggests that no statistical relationship and  significance exists in a set of given single  observed variable, between two sets of observed  data and measured phenomena.

Counter to this we have something called Alternative  Hypothesis, In our case the alternate hypothesis will  be “Remdesivir and Placebo are different and  Remdesivir is shortening the time of the recovery of  covid-19 patients”

Now the process is very straightforward- 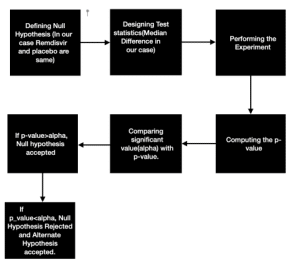 Lets discuss every piece of this big puzzle one by  one…

Lets define our Null Hypothesis once again. “There is No Difference in Population Median,  means Remdisvir and placebo have almost same  recovery time or in simple terms remdisvir and  placebo have same distributions and remdisvir is  not helping the patients to recover fast.”

So we are assuming that there is no difference  between Remdisvir and Placebo.

Lets say from our observations we found the  Mr(Median of Remdesivir observation) to be 8 days and  Mp(Median of Placebo observations) to be 15 days  and the difference comes out to be 7 days.

Let’s Understand the meaning of p-value,

P(x=7|Ho) this is how you write p value. P(x=7|Ho) means what is the probability of observing  a sample median difference of 7 days with a sample  size of 541 people if null hypothesis is TRUE.

Here Ho(Null Hypothesis) is, “ Distributions of Set A and Set-B are same”

Or we can say, it is the probability of observing a  difference of 7 days in Medians between SET A(Remdesivir) and SET-B(Placebo) if there is no  population difference in median days.

When i say “If there is no population difference in  median heights”, it simply means that i am talking  about Null hypothesis.

Computing p-value is itself needs a different blog, I  will cover that later but for now lets see we have  computed p-value for the same.

If P(x=7|Ho)=0.2 → it means there is 20% chance  of observing a difference of 7 days when there is  no population median difference.

p-value > alpha(5%), means Ho is accepted,  means we will say that there has not been  significant proof which tells us that Remdesivir is  better than placebo in reducing recovery time of  patient.

If P(x=7|Ho)=0.03→ it means there is 3% chance of  observing a difference of 7 days when there is no  population median difference.

p-value <alpha(5%), means Ho is rejected the  Ha(Alternative Hypothesis) is accepted means we

will say that there has been significant proof  which tells us that Remdesivir is better than placebo  in reducing recovery time of patient.

And that’s how this test will end.

There could be multiple tests like this which were  performed by National Institute , Hypothesis Testing is  one of them.

There is an another Interesting topic which we will  cover in future blogs called Confidence Interval. That’s it for now, Thank you for reading.