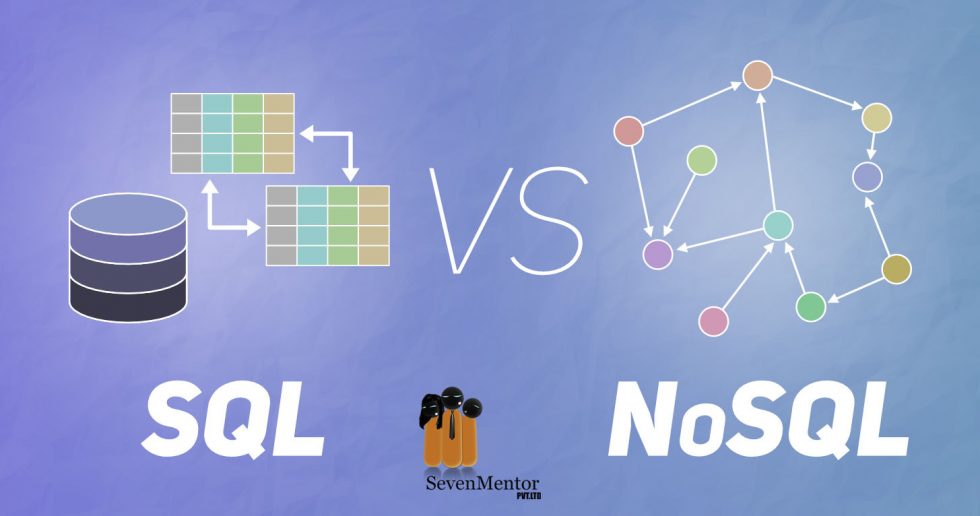 In this blog I will discuss database management system and SQL, No SQL databases and then finally I will discuss a few key differences between SQL and NoSQL databases. According to expert data doubling with every two years. Increasing big data now a day has highlighted the limitation of a traditional database. New methods of accessing the data are available which address volume, variety, and velocity of structured and semi-structured data. Long ago data is stored in a file in a rack in offices later on due to the evolution of computer data is stored in flat files.1970 ‘s SQL is integrated in IT. Data is store in the relational database. SQL database becomes very popular. Technology is getting change rapidly and a new buzz world NoSQL is very popular because of generating large data due to the internet. So lets us understand first what is data? Basically data is information or fact used to collected for reference or analysis. A database management system (DBMS) is used for managing the database. It provides a systematic way to perform the CRUD operations (Create, read, update and delete) the data. End users can easily access the data for creating,read, update and delete data in the database.DBMS acts as an interface between the database and end-users or application programs. It ensures data consistency while it has been accessed.

Popular types of DBMS are

SQL has three types of language such as

It mainly deals with the structure of the database. DDL commands are CREATE, ALTER, TRNCATE

DML is used to manipulate the data. These commands are used to insert, update and delete data from the database. DML commands are INSERT, UPDATE and DELETE.

DCL commands are basically used to give access to the user. Commands used in this language is GRANT and REVOKE

Transaction control is mainly deals with the consistency of the data. It is used to achieve ACID property of transaction. Commands are

SQL queries are very effective to restive a large amount of records from the database.

SQL queries have their own syntax to work with database which does not require more code to manage.

3>Based on well-defined standard:

SQL standard is followed by all the database management system

SQL can be use on any device.

By using SQL quires user’s different view can be manage.

Most of the SQL Databases have a complex interface which makes it difficult to access.

The database is having some hidden rules because of which sometimes programmers don’t have full control while using it.

Some of the databases go to the proprietary extensions to standard SQL for ensuring the vendor lock-in.

The operating cost of some SQL versions makes it difficult for some programmers to access it.

NoSQL Database: It is one of the most popular type of database with meaning “Not only SQL”.

NoSQL databases are very popular because of internet giant’s .e.g Google, Facebook and Amazon which deals with large amount of data.

When we deal with large amount of data then response time is slow with RDBMS. NoSQL database is suitable in that case.

NoSQL is used in following cases

1>When large amount of data is process.

2>There is no relation between data or relation is not important.

Types of NoSQL database are.

Types of NoSQL databases and the name of the databases system that falls in that category are:

NoSQL database are of four types:

1>Column: Data tables are use as column rather than row. They used to query the large amount of data as compare to traditional databases.

3>Key –value:An associate array and map is base of key –value pair model. It is suitable for web applications session management.

4>Graph: In graph data is organized in node and edges. We can consider same as relational database record as a node and relational is edges. Such a database is useful management of customer relationship, reservation systems and road maps.

NoSQL Database having auto replication feature. By using that feature in case of failure data is automatically replicates in previous state.

The main focus of NoSQL database is storage.

Most of the NoSQL database is open source hence there is no standard.

Some NoSQL database like MongoDB store data in JSON

format. In such case documents are quite large.

As compare to relational database NoSQL database has a management challenge.

Difference between SQL and NoSQL database:

In industry there are many database are used which mainly under two category SQL and NoSQL.

SQL database store’s data in tabular format i.e. in the form of row and column. In NoSQL database is newer one which store data other format like column, key-value pair or document format.

There are some key difference SQL and NoSQL database which is as follows:

I have discussed SQL and NoSQL database in details. Which database should be use is completely depend on business requirement, size of data and type of data. Now a day’s NoSQL databases are gaining popularity due to easy integration with big data. It has other feature like scalability and open source.

NoSQL database is young technology and as compare to SQL it lack in standard.

SQL is good choice if data is in predefined structure, schema and data consistency is important.

NoSQL is good choice for the companies where data is tremendously grown and no clear schema definition. As compare to SQL NoSQL is more flexible and is use to analyze large quantities of data.