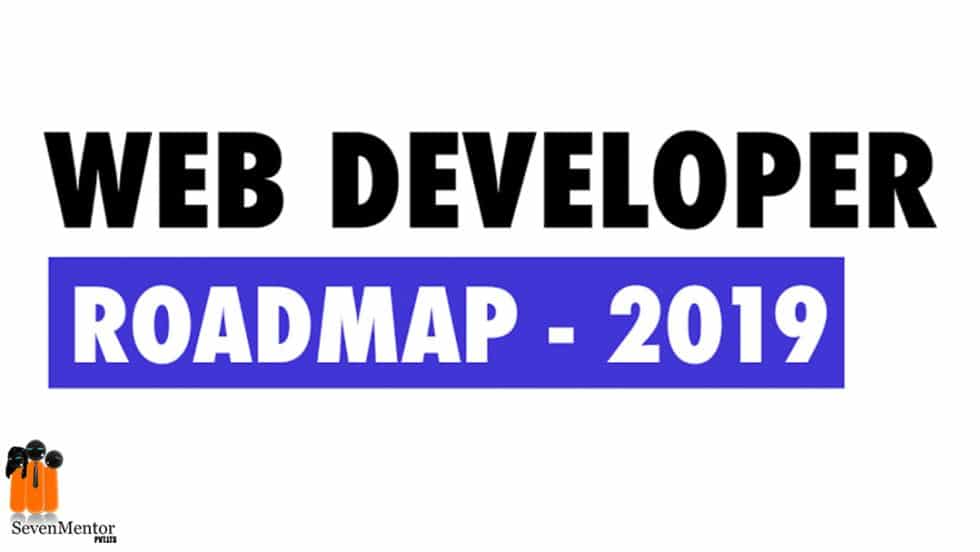 This article illustrates how to become a web developer in today’s timing and guide you on how you can learn and master Web Development. It’s a group of different paths to learning front-end, back-end, and all other things a Web developer should know. You will not just know about web development but about necessary programming stuff which is important for all every type of programmers.
`The RoadMap is also separated into 3 sections, the first section is about most common skills which every web developer should know, while the second and third section is about back-end and front-end development, two main aspects of web development. You can either learn Front-end or Back-end or both, it depends on your choice. If you want to become a FullStack Web developer then you have to learn both front-end and back-end, there is no escaping there.
In Frontend also you can select to learn the framework you want like Angular or Vue.js, React, you don’t need to learn them all but learn the one you like. If you ask for my recommendation, Vue.js is a better choice in today’s scenario than the other two but again those are more used than Vue.js yet. Anyway, Here’s where you will start. As I have said before, You can choose either the Front-end or Back-end path below, depending upon your own interest. As you can see there are eight recommendations in yellow that you must learn for either path, these are the common things every programmer should know.

Git is the most commonly used modern version control system in the world today. It is an actively maintained open-source project. it was developed in 2005 by Linus Torvalds, the famous creator of the Linux operating system kernel. An astonishing number of software projects rely on Git for version control, including commercial projects as well as open-source. Developers who have a history of working with Git are very well represented in the pool of available software development talent and it works well on a wide range of operating systems and IDEs (Integrated Development Environments). Having a distributed architecture, Git is an example of a distributed Version Control System. instead of having only one single place for the full version history of the software as is common in once-popular version control systems like CVS or Subversion (also known as SVN), in Git, every developer’s working copy of the code is also a repository that can contain the full history of all changes.

SSH can also be called Secure Socket Shell or Secure Shell o. It is a network protocol that allows users or we can say particularly system administrators, a secure way to access a machine over an unsecured network. SSH also alludes to the suite of utilities that implement the SSH protocol. Secure Shell supplies very strong authentication and encrypted data communications between two machines connecting over an open network i.e internet. SSH is broadly used by network administrators for managing systems and applications remotely, allowing them to log into another machine over a network or internet, execute commands and pass files from one computer to another. Functions that SSH enables include:
It provides secure and interactive file transfer sessions; It provides automated and secured file transfers;
It provides secure issuance of commands on remote devices or systems; and secure management of network infrastructure components. SSH is also widely used in scripts and other software to enable programs and systems to remotely and securely access data and other resources.
In short, It allows you to remove login to another host, another popular networking concept which every web developer should know.

HTTP stands for Hypertext transfer protocol. In simple words, these are rules for sending and receiving text-based messages. As we all know, machines understand the language of 1’s and 0’s i.e. Binary language. Therefore, possibly every set of 1’s and 0’s construct something, it could be a word. Let’s say I want to write ‘a’. Now, if 0 stands for ‘a’, 1 stand for ‘b’, and 01 stands for ‘c’, I can infer that a combination of 0’s and 1’s can construct a word as well. In this case, the text is already formed and is being sent on the network. The machines work on many languages – pure, text, binary and some other formats like byte codes. Here, what is being transferred is text. I am emphasizing on ‘text’ because this text is interpreted by the browser and the moment the browser interprets it, it becomes hypertext, and the protocol that passes the text is alluded to as hypertext transfer protocol – HTTP. Using HTTP, you can definitely transfer images and text and even sound, but we cannot send videos.
HyperText Transfer Protocol Secure (HTTPS) is another but a secure version of the HTTP protocol. the protocol over which information is sent between your browser(client) and the website that you are connected to. The meaning of ‘S’ at the end of HTTPS is ‘Secure’. It means all communications or we can say the conversation between your browser and the website are encrypted. HTTPS is mostly used to protect highly confidential online transactions like online shopping order forms and online banking. The HTTP protocol is the backbone of the web and a good knowledge of both HTTP and HTTPS is compulsory for a web developer

If you are creating global applications that display information in many distinct languages across the world then you must have a good knowledge of character encodings. It basically instructs your browser on how to show your data. Web Development Basics It’s pretty clear that if you want to become a good Web Developer then you should know the basics o web applications, internet, protocols like HTTP and web development in general. HTML | Introduction HTML stands for HyperText Markup Language. It is accustomed to style websites victimization language. HTML is that the combination of machine-readable
text and language. Hypertext defines the link between the web pages. A markup language is employed to outline the text document at intervals tag that defines the structure of websites. This language is employed to annotate (make notes for the computer) text so a machine will comprehend it and manipulate text consequently. Most of markup (e.g. HTML) languages are human readable. The language uses tags to outline what manipulation needs to be done on the text.
HTML could be a language that is employed by the browser to govern text, pictures and different content to show it in the needed format. HTML was created by Tim Berners-Lee in 1991. The first ever version of markup language was markup language one.0 however the primary normal version was markup language a pair of.0 that was printed in 1999.
Introduction to CSS HTML was originally designed as an easy method of presenting data, with the aesthetics of an online page being way decreased than the content (and mostly being left up to the web browser). Of course, currently that the online has become as fashionable because it has, the presentation of your content has become nearly important to a site’s success. CSS is the key presentational technology that is used to design websites.

JavaScript is a very powerful client-side scripting language. JavaScript is employed primarily for enhancing the interaction of a user with the webpage. In different words, you can make your webpage more lively and interactive, with the help of JavaScript. JavaScript is additionally being employed wide in game development and Mobile application development.
Introduction to TypeScript TypeScript could be a artificial language designed for large-scale JavaScript application development, it has been designed as a typed superset of JavaScript. This means we’ve truly been writing matter this whole time! This language allow us to use features from the most recent ECMAScript versions and even some features that are not even in the scope of the standard. This is as a result of once compiled, it produces JavaScript in a cross-platform safe version. TypeScript, presently within the version a pair of.5, adds options like ex gratia static writing, classes, interfaces, modules, and many others. All of this enable US to use JavaScript from the longer term right now!

Angular Introduction: What Angular IS

AngularJS accustomed be the “golden child” among JavaScript frameworks, because it was ab initio introduced by Google corporation in 2012. It was built with the Model-View-Controller concept in mind, though authors of the framework often called it “Model-View-*” or even “Model-View-Whatever”. The framework, written in pure JavaScript, was supposed to decouple associate degree application’s logic from DOM manipulation, and aimed toward dynamic page updates. Still, it wasn’t very intrusive: you could have only a part of the page controlled by AngularJS. This framework introduced several powerful options permitting the developer to form made, single-page applications quite easily. On prime of that, the concept of directives was given, that allowed inventing your own markup language tags, dropped at life by JavaScript