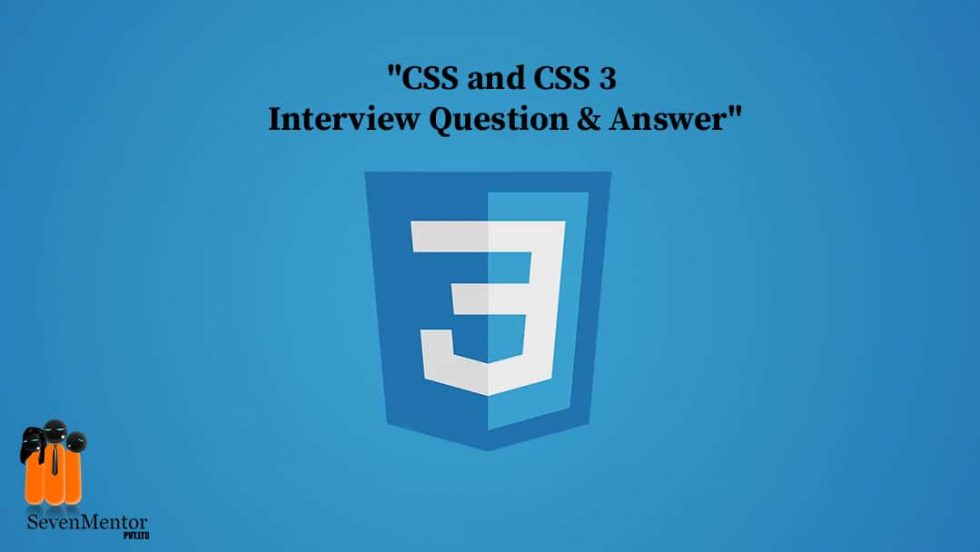 Ans- A selector is used to select an element to apply the CSS styles. It can also be used as a condition or a CSS rule to determine the elements that match with the selector.

The different types of selectors are:

Ans- CSS2 includes all the sections into a single document with all the information in it.

CCS3 has specifications divided into various sections or modules.

CSS2 not supported by all browsers.

CSS3 supported by all browsers.

Ans- There are  three main types of CSS as mentioned below.

Inline CSS- it is written in a single line separated by semicolons. These properties are placed inside the style attribute of the HTML element, on which to apply style.

Internal CSS –it is written within the HEAD element of the HTML document. This style is applied only to the documents in which it is defined and not referenced by any other web document.

Ans- External CSS is useful as compared to the others for the following reasons:

Embedded style sheet helps us to define styles in one place in an HTML web document. To embed style sheet information into an HTML document using <style></style> tags in the head of the document.

Ans- Selectors are the most important concepts in web development. We can style anything in the web document using the selectors. There are various selectors: Universal selectors – most commonly used. The universal selectors selects all the elements that are present in an HTML document. The syntax is *{}.

This will set to all the elements in the HTML or XHTML documents on which the CSS rule is applied.

Type selector – it matches all the elements specified in a list with the given value to determine the elements to which the CSS rules are applied. Example – h1, h2, p {font-size: 10px; color: red;}

Query selector – the querySelector() and querySelectorAll() method accept CSS selectors as parameters and return the matching elements node in the document tree.

Ans- Responsive web application design is an approach to web page creation that makes use of flexible layouts, flexible images and cascading style sheet media queries. The main goal of responsive web design is to build web pages that detect the visitors’ screen size and orientation and change the layout accordingly.

Ans- If two or more conflicting CSS rules at the same time to the same element, then the browser follows some rules to determine which one is specific and therefore is applied to the element. The selectors in the hierarchy of highest to lowest: inline styles, ID selectors, Classes, Attributes, and Pseudo Classes, Elements and Pseudo Elements,

The border-radius property is used to apply rounded corners on various HTML elements, such as images, table cells.

<!—applying rounded corners in an image– >

Margin – it is a CSS property which creates space around elements, or create space to the exterior defined borders. Margin property is of the following types – margin-top, margin –right, margin-bottom, margin-left. The margin property is assigned values as – auto (automatic calculated by browser), length (given by user in px, pt, cm etc), % (given by user depending upon the width of the containing element) and inherit (inherited from the parent element).

Padding – it is a CSS property which creates space around elements, or create space inside any defined borders. Padding property is of the following types – padding-top, padding–right, padding-bottom, padding-left. The padding property is assigned values as –length (given by user in px, pt, cm etc), % (given by user depending upon the width of the containing element) and inherit (inherited from the parent element).

Ans- Icons on a website are handy. They provide easy visual information, providing links to email forms, telephone numbers, maps and more.The first step is to link to the font from the web document. The name of the given icon class is written in an inline HTML element.

Ans- Pseudo classes are predefined classes that enable us to apply certain styling rules on specific states of an element. These classes allow to style visited or unvisited links, or to specify how the links are rendered in response to user actions, or to add specific effects to selectors (selectors are the names given to different styles). A pseudo-class always starts with a colon (:). The syntax to define a pseudo class is:

Note:This property takes values from 0.0 to -1.0. Lower the value the more transparent.

Ans- The position property is used to map the element slots with the elements. It specifies the row and column template in which an element will be placed. The position syntax is as – position: static|absolute|fixed|relative|sticky|initial|inherit;

Static – Default value. Elements come into view in the order or in the document flow.

Fixed – the element is located relative to the browser window.

Relative –the element is located relative to its normal position.

Sticky – the element is positioned based on the user’s scroll position.

Initial – sets the property to its default value.

Inherit – it inherits the property from the parent element.

Important is a property in CSS. An !important declaration provides a way for a style sheet author to give a CSS value more weight than it naturally has.

When selling with cascading order and inheritance, here are three main rules to keep in mind:

If two rules come into clash, then the last one used will take priority. When used in the same element, selector precedence occurs in this order (3 being the highest precedence):