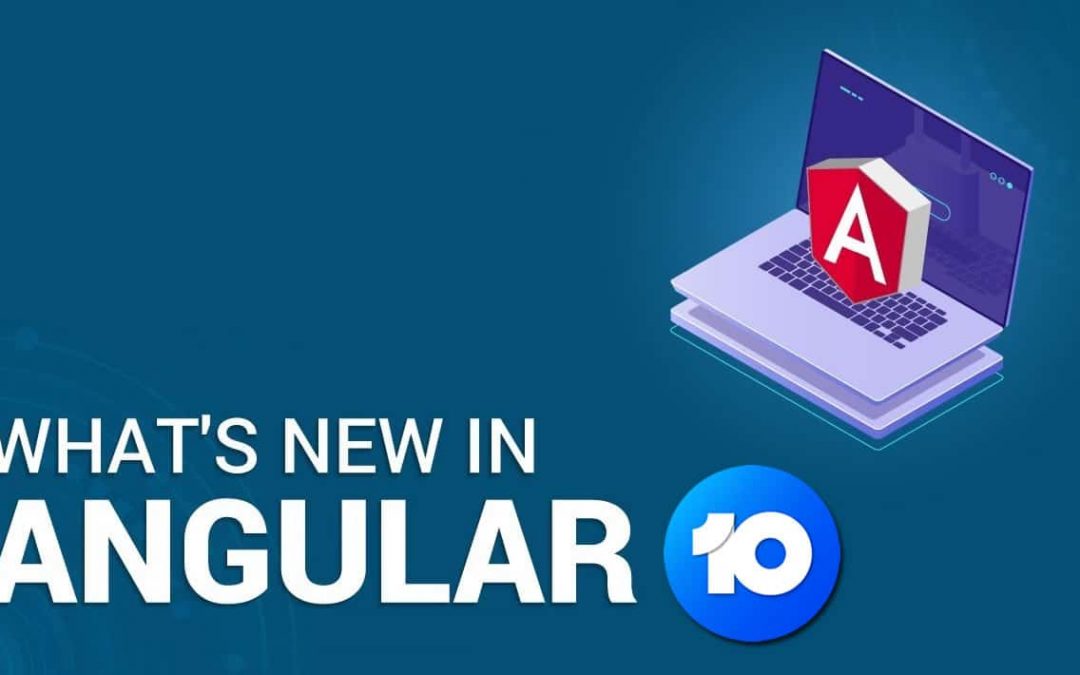 The new version of Angular 10 has been published on date 24 june 2020 .Angular 10 has the major upgrade for the popular web development framework. The upgrade to the Google-developed, TypeScript-based framework puts more importance on excellence, tool, and ecosystem improvements than new features.The newer version Angular 10 is smaller than the previous version i.e Angular 9. In the Angular 10 having the new capabilities like a new date range picker in the Angular Material User Interface Library and also having the warning for CommonJs imports. CommonJs warning alerts developers when slower the application, when a dependency packaged with CommonJs and allowing to substitute an ECMAScript module bundle.

In adding up, optional stricter settings offer a more-strict application setup when creating a new workspace with  the cli command ng new, via ng new – strict.Enabling this flag initializes a new application with new settings to improve maintainability, allow the CLI to do advanced optimizations on an app and helps catch bugs. Now we jump towards the new features in depth and how to migrate to the Angular 10 version.

One of the new features of Angular 10  is the support for “Solution Style” tsconfig.json files. This allows IDEs to more simply find which project a TS file belongs to, when you have a number of tsconfig files.

As an Angular CLI application does have a number of tsconfig files, this upgrading is useful to us! The CLI now generates applications with a base tsconfig, extended by the app one,  the e2e tests one and the  unit tests one. The tsconfig.json file now only references the others. If you update your application using the ng update CLI command, schematics will automatically do this refactor for you.

If you upgrade your current angular version  to Angular 10 using ng update , the CLI will transfer your workspace to this structure. Earlier versions of TypeScript do not support “solution style”, so this may be the cause behind the breaking change described above.

Angular package format has changed in Angular 10, and the new format does not include fesm5    and esm5 distributions any longer. Angular packages (@angular/*) will not include fesm5 and esm5. Since Angular generates ES5 from ES2015 and ES2015 is the default scripting language level consumed by Angular tooling, those code distributions have become outdated. The format change is as follows:

If your application depends on fesm5/esm5 files, you can settle down, because they are still consumable by the build structure. Likewise, you do not have to be troubled if your Angular library does not transport esm2015 or fesm2015, because the CLI will fallback to others. However, in a good turn of bundle optimization and build speed improvement, it is suggested to deliver ES2015 outputs. We have made several new removals and deprecations from Angular.

The Angular Package Format no longer includes FESM5  or ESM5 bundles, saving you 119MB of  install and  download time when running  npm or  yarn   install for Angular packages and libraries.

Based on deep discussion with the group of people, we are deprecating support for older browsers including Internet Explorer Mobile and IE 9, 10

Module Without a Generic Type  and With Providers [removed]

Earlier versions of Angular were capable to compile static method proceeds with ModuleWithProviders type without the generic type, i.e. ModuleWithProviders<SomeModule>, because the generated metadata.json files would have the information required for compilation. After Ivy compiler, since metadata.json is not necessary, Angular checks the generic type for type validation or confirmation.

ModuleWithProviders without a generic type was available in the previous version of angular. As of Angular 10, it is totally detached.

If you are talking about the advantage of inheritance from classes that use Angular features such as Angular decorators or dependency injection, now you need to decorate those base classes as well. If you do not decorate these base classes with decorators then, Angular will throw an error about the missing decorator on the parent.

Angular 10 compiler throws  below error when the Directive decorator is missing:

In this time Angular 10 compiler throws a less detailed error. The error looks as below:

Error:    Class is using Angular features but is not decorated. Please add an explicit Angular decorator.

I am sure any good angular developer not do that, but if you add the   Component decorator on the parent and remove the decorator on the child then, Angular 10 compiler will throw the error below:

Error: The class ‘SomeComponent’ is listed in the declarations of the NgModule ‘AppModule’, but is not a directive, a component, or a pipe. moreover remove it from the NgModule’s declarations, or add an proper Angular decorator.

WrappedValue is probably removed with v12  and deprecated. if you have never heard of it before then read it from the angular.io.

As a side effect of this contempt, you may see more ExpressionChangedAfterItHasBeenChecked errors than before, because Angular would not throw an error when WrappedValue were evaluated as equal.

Support for IE Mobile and IE9, IE10, has been deprecated and will be dropped later. The increased complexity  and bundle size was the main reason. Bearing in mind even Microsoft dropped support for these browsers; it makes a lot of sense.

You can find the common release of Angular 10 on GitHub. To update your current Angular install version, you just need to run this command:

I would like to call attention to how thankful every angular developer that Angular team is trying to keep Angular up-to-date. This is a huge revelation and, in my humble opinion, just as meaningful as a state-of-art renderer. It is also very nice to see how easy it is to migrate an existing project into the Angular latest version. In short Angular 10 with new features like TSlib updated to TSlib 2.0, browser configuration for new application, Auto completion is being removed from HTML entities, such as &amp, because of doubtful value and a performance issue, generic has been made mandatory for ModuleWithProviders, TypeScript 3.9 is now featured and supported in angular 10, Previously, only one translation file per locale was permitted  now possible to Merging of multiple translation files and  A CanLoad guard returning Urltree cancels current navigation and redirects it.