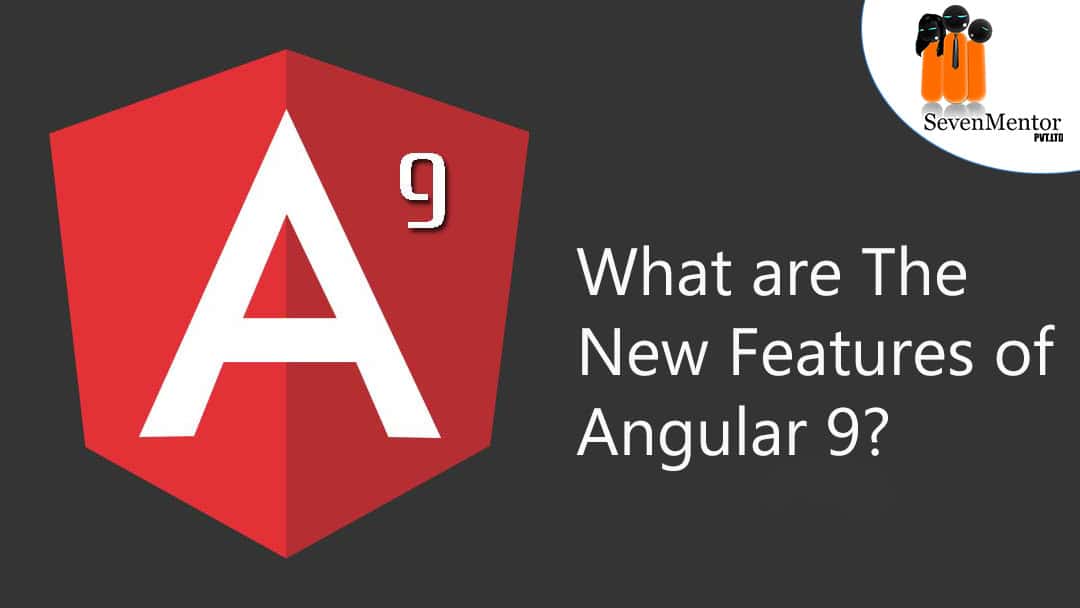 In this blog, we discuss new features of Angular 9, including the cons of angular 8. The Angular 9  version released in the month of October/November 2019. To learn Angular 9 we required basic knowledge of HTML, bootstrap, javascript, and typescript to learn in-depth regarding javascript and typescript and know the differences among the all released Angular versions.

Angular is one of the high-flying open-source frameworks for building mobile applications and web applications. The most up-to-date version, Angular 9.Angular 9  faster, and easier to use and it will be making Angular development easier as compared to other versions. Developers also now have a clear clear project structure. And syntax. The main goal of Angular 9 is to make the Ivy compiler available for all applications. The main advantage of Ivy is that it is able to extensively reduce the size of web applications.

Let’s see New Features in Angular 9 one by one:

We will start by pointing at one of the difficulties that beset previous versions of Angular: large bundle files that have indifferently impacted download times and, as a result, application performance.

One of the current problems with prior Angular versions is the comparatively large file size of the application — more precisely, the file size of the generated JavaScript bundles. If you compare Angular to other libraries like Vue.js or React, the Angular app is extensively larger.

At runtime, you maybe won’t feel the difference. While Angular runtime performance is very good, the loading can take a long time because yet a simple app can be comparatively large.

JavaScript bundles range also hints at another trouble: there is more to learn with Angular because Angular is a complete structure with lots of fixed developer tools, while other JavaScript libraries are mainly paying attention to components.

The Angular team focused on the bundle size and migrated the problem into the small size in the earlier version.

One of the most important features that shipped with Angular 8 was the Ivy preview opt-in. Angular’s new internal build and render pipeline is Ivy. The renderer is the engine used to take the instructions that proceed by the Angular components with the templates and after that translate them into instructions that help to change the DOM (Document Object Model) object.

The Ivy compiler is secreted away, and replaces ViewEngine with Ivy but not change the way you work with Angular previously. But this change does have an important collision on the code that’s being generated.

The Angular 8 foretaste lets users play around with Ivy. With Angular 9, Ivy is the standard renderer used to process the instruction. If a renderer is easier to implement, or more resourceful, that means you can send less code because fewer instructions are required, and that’s the main purpose of Ivy engine.

Ivy is a much smaller JavaScript bundle, due to the fact that  Ivy solves Angular’s bundle weaknesses problems. You can simply say that  Ivy will be a game-changer because it brings Angular applications to a new level in terms of size and performance.

Ivy has not changed the way Angular is used previously, but it does change how the app is generated or rendered. The google Angular team has focused on initiatives like the differential loading of modern JavaScript, which shipped with Angular 8.   This means that dissimilar polyfill bundles are created and deployed mutually. At compile time, only the polyfills that are necessary for the definite browser are loaded, thus leading to less code being downloaded.

The big new feature we’ll dive into is the Ivy compiler. We will give details about what Ivy does and why it’s essentially a significant characteristic for the upcoming of Angular (it solves some of the troubles with large bundles and application performance).

We’ll contact on a small number of other new features, counting selector-less bindings and internationalization support. You’ll see why we’re calling this an evolutionary free rather than revolutionary.

4. Pre-release Version of Angular 9 and Benchmarking of  Angular 8

We will run some standard tests to compare presentations between a pre-release version of Angular 9 and Angular 8.

Nowadays all people use smartphones and other devices to use half of the website traffic. A huge percentage of these mobile devices access web pages from locations that go through from slow internet connections.

To solve this slow connection issue Developers can redesign previous applications to reduce the size of the downloadable resources and enhance the mobile user experience, but these changes can take more time and it’s difficult, expensive, and introduce unexpected risks to their application.

But in the earlier version of Angular 9 reducing the javascript bundles through lvy and speed up the web application.

In Angular 9, the latest Ivy compiler will finally be the default, so Angular 9 apps built with Ivy will be more efficient and faster.

Ivy was optional in Angular 8 so you had to clearly enable it by adding the following lines to the tsconfig.json file in the angular project folder:

And after that  you had to run the compiler by executing the ngc command inside the angular project folder:

But in the Angular 9, the setting off the enable option in the tsconfig.json file is no longer needed since the Ivy renderer is the default in angular 9 applications.

In angular 8 lvy previews one feature is the missing name of that feature is ViewEngine which is available in angular 9. ViewEngine was the capability to use selector-less directives as main base classes.

In Angular 9, this viewEngine feature has been added to Ivy so that developers get the benefits of Ivy compilation, but don’t miss previous functionality.

Below example showing a decorated child class that inherits a constructor from an undecorated base class:

Angular 9 ViewEngine already supports this pattern. But, it was misplaced in Ivy’s first release: without the @directive annotation identifying the BaseDir class as a directive, but the Ivy compiler did not understand information about its constructor parameters.

Angular Version 9 will now send with his feature so that it becomes consistent across all of the Angular codebase.

While the release of angular  is not final, and currently in release candidate stage, you will  need to add the –next flag:

If in the previous application you are using Angular’s localization (i18n) framework, then there is a need to use the ng add a command to install a new @angular/localize package:

When you examine the difference  of the angular.json file after updating, you will also notice that a new i18n configuration section:

There are some updates to your angular.json configuration you should understand .

Second, thing is to consider updating the baseHref configuration for every locale based on application requirements. In most instances, we will allocate each locale of our application using either unique paths or unique subdomains.

In my application  case, I wanted every locale to be served on unique paths:

As such, I use to modify the baseHref for the de locale to:

Angular version 8 application used multiple build configurations for every locale. Based on my analysis so far, you can remove these as they are no longer needed:

In my case, I removed both the production-de and de configurations. Finally, update your production build command in the application package.json file to the new –localize flag to build all required localizations:

Let me also mention that you simply can create an additional configuration for building either a selected locale or a group of locales.

After we have successfully updated from angular 8 versions to Angular version 9, there are two minor things we need to do:

In  the Angular version 9 update, our first work is to migrate from TestBed.get() method  to TestBed.inject<T>() method.

This update is simple, and who doesn’t want to delete code. Just remove the array of entryComponents from all @NgModule() decorators in your web application.

And after we have removed the not required entryComponents array: