Why One Should Learn Python | SevenMentor

Why One Should Learn Python

Why One Should Learn Python 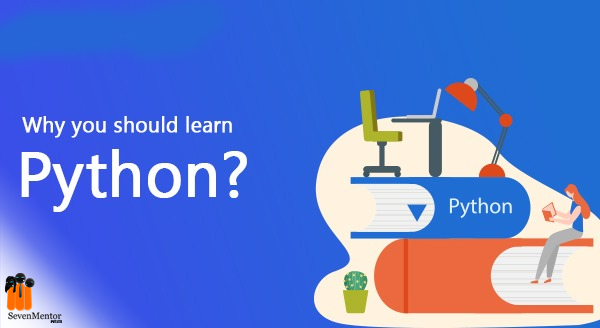 Why one should learn Python?

Python is one of the language which is growing and becoming popular every year. Python was created by Guido van Rossum in 1991. According to python’s official website python is an interpreted, object-oriented, high-level, general purpose programming language.

Python is called interpreted language because we don’t have to compile manually, it does by itself. We just have to run the python code. It runs our code line by line. So even if we get any error in code still it will run till the line where there is no error.

Python is a high level language means development of program is done in more user friendly way and it is independent of computer’s hardware architecture.

Easy to use and learn:

Python has very good support community. There are lots of documentations, guides and video tutorials available for learning python. And those always get updated time to time.

Python has many Libraries and Framework:

Python has many libraries and those can be used to select and save time and effort of developer. And those are better when we want to develop application fast with minimum spending time.

These libraries are used for various different purposes.

Became popular and demanding in market:

Python became more demanding and popular choice of people. Because it is more demanding now a days in market. Many students and industry programmers are using python language for building their projects. Learning python has become very important for data science.

Python language is very flexible as using this language beginner can also build project according to how much knowledge he has. And experienced person also can build high end software or data science or any other project.

Python language is used for automation. For automating our daily non compromised tasks we can automate using python and we can save our time programmer with less experience can also build such automation.

What is python developer:

Python developer uses python to build software according to requirements from client. They are responsible for creating applications, frameworks, tools, websites, web apps, AI based applications and many other applications. Python developers bring value to vast number of projects.

What will python give to my business:

Applying data science and machine learning on your business data python can find patterns from data and answer to questions of business decisions. Businesses can develop high quality python applications. And for that businesses hire python programmer’s team who will match the exact requirement of it’s project.

Why people love python so much???:

Popular apps have been developed in python. Python is becoming a very common language because it enables developers to focus on their app not on the platform or system where they are working on or they don’t have to worry so much on syntax errors. They don’t have reinvent the whole platform again for all different projects or apps. They can use platforms developed by python and develop apps or projects in less time.

Now we will see which all big apps which we use on regular basis are developed by python.

This app has changed world of photography. It made it most instant, usable and popular. It currently has higher than 400 millions users a day. This shows that apps built in python are scalable.

After Facebook and Twitter pinterest ranks third. It’s basically a social network that helps pople to bookmark, capture and exchange photos with others. Pinterest is one of the most used application. Which is built solely on Python and Django to deal with vast volume of content efficiently.

Currently Spotify is leading music service with sales of over $4 billion. This makes it one of the most influential industry leaders and one of the top python users. Because of pace and growth firm says python was the best choice. It also provides knowledge of analytics. Because of this Spotify monitor different features such as radio and explore which is focused entirely on user’s personal music preference.

As looking at the above examples or apps you can see how these big apps are developed in simple language. This is the beauty of python, as python is simple at the same time it is powerful and scalable. We can develop application in less time.

Why you should learn python??

As mentioned earlier, there are many reasons that shows why python is top programming language and why it is considered as such today?

The first and most important reason is it is versatile. Which allows it to work in projects with cutting edge technologies especially artificial intelligence and data science.

The language has plenty of libraries and packages for both fields, which gives another alternative to start project with solid foundation.

It has another crucial reason that it has everlasting ease of use. We already mentioned how it is easy for beginners to start programming in python. It is perfect way to teach logic behind software development easily.

As we know python is popular. There are number of developers that know how to use it. And many projects use python widely. Which is turned out preferred language for many companies and teams. So search for both python developers and python development companies is easy.

Though, most of people will say python is best programming language in the world. But we won’t be so quick. But it is impossible to think that python is solution for all of our digital challenges. Other programming languages are also as strong as python, like Java, javascript, c, c++. Python developers will be quick and will find out deficiencies in those languages to support python. Python also has it’s disadvantages but here we are saying top languages are one that cover all possible uses while being efficient. But there is no single language that can do everything.