Wireless network gives freedom to user to move around at will while staying connected to network. User can bring different wireless devices and connect to network easily and smoothly. Wireless data must travel through free space, in free space environment, many variables can affect the data and its delivery.

802.11 is a legacy standard of IEEE for wireless connections. Wireless device should adhere to 802.11 standard to minimize effect of variable on the data and its delivery.

Wireless spectrum must be exist where user want to connect wireless device.

2.Wireless networks can be segregated in following types :-

We all know about ‘Bluetooth’ wireless standard. It is developed by Special Interest

Group (SIG), the initial members of these group are companies like Ericsson, Intel, IBM, Nokia and Toshiba. Two devices like mobile phone to mobile phone, mobile phone to laptop, laptop to wireless headphone with Bluetooth are used for data transfer, It supports distance 10 to 15 meters.

Today’s laptop are Wi-Fi enabled means wireless interface card is inbuilt in laptop, but generally desktops does not have inbuilt Wireless LAN card. We have to purchase wireless LAN card and install in desktop. These wireless NIC cards detect the spectrum of AP and we can connect to wireless network.

A Hertz (Hz) is the most commonly used frequency unit and it is nothing other than one cycle per second.

Use the same frequency or channel. 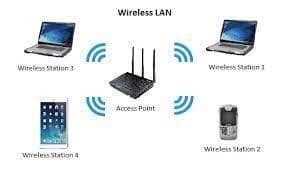 To create wireless LAN we need to set the IP address on all the desktop and laptops in the similar range of Access Point IP address. On AP we need to set SSID and BSSID also network security key and Encryptions protocols. Let us discuss on how to secure wireless network in next topic.

Wireless frames are in air, any device within same area and using same channel can overhear transmission, if frames are not encrypted then anyone can inspect the contents. Only BSSID indicates intended sender or receiver is Access Point.

1) Open (Risky): Open wi-fi networks have no passphrase. You shouldn’t set up an open Wi-Fi network.

This uses the modern WPA2 standard with older TKIP encryption. This isn’t secure and is only good idea if you have older devices that can’t connect to a WPA2-PSK (AES) network.

This is the most security option. It uses WPA2, the lates Wi-Fi encryption standard, and he latest AES encryption protocol. You should be using this option. On devices with less confusing interfaces, the option marked “WPA2” or “WPA-PSK” will probably just use AES, as that’s a common-sense choice.

This enables both WPA and WPA2 with both TKIP and AES. It is also called as mixed mode and recommended.

Did You Know: An Austrian and American actress had invented basic Wi-Fi (Frequency Hopping. Her name is Hedy Lamarr. Her invention was approved in 1942.