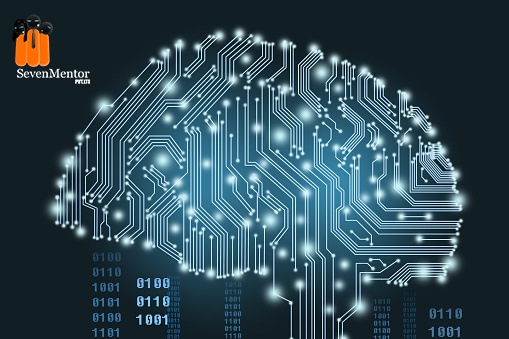 Convolutional neural networks (CNNs) are a type of artificial neural network designed to process data with a grid-like topology, such as images. They are named “convolutional” because they use a  mathematical operation called convolution to extract features from the input data. CNNs have become a popular choice for tasks such as image classification, object detection, and natural language processing due to their ability to automatically learn hierarchical representations of data.

The next layer, called the pooling layer, reduces the dimensionality of the data by aggregating the output of the convolutional layer. This is done using a technique called max pooling, which selects the maximum value from each group of values in the feature maps. Pooling helps reduce the data size and makes CNN more efficient, as it reduces the number of parameters that the network needs to learn.

The final layer, called the fully connected layer, interprets the features extracted by the previous layers and makes a prediction based on them. This layer is called “fully connected” because all of the nodes in the layer are connected to all of the nodes in the previous layer. The fully connected layer uses the features extracted by the convolutional and pooling layers to classify the input data into one of several categories.  Data Science course in Pune at SevenMentor helps improve your career or master on-demand technologies.

One of the main advantages of CNNs is their ability to automatically learn hierarchical representations of data. This allows them to learn complex patterns and features in the input data without requiring explicit feature engineering. For example, a CNN might learn to recognize a cat  by first learning to recognize edges and shapes, then combining these features to recognize more  complex patterns such as fur and whiskers, and finally combining these patterns to recognize a full  cat. This hierarchical approach allows CNNs to outperform traditional machine learning algorithms  on tasks such as image classification.

CNNs have also been successful in natural languages processing tasks, such as language translation and text classification. In these tasks, the input data is typically a sequence of words or characters,  and the CNN learns to recognize patterns and features in the sequence that are relevant to the task at hand. For example, a CNN might learn to recognize the presence of certain words or phrases in a  piece of text that are indicative of the text’s sentiment or topic.

However, CNN’s are not without its limitations. They require a large amount of labeled data to train, and they can be prone to overfitting if not used properly. Overfitting occurs when a model is too complex and learns patterns that are specific to the training data, rather than general patterns that would apply to new data. This can lead to poor performance on unseen data. To prevent overfitting, it is important to use techniques such as regularization and early stopping, and to  evaluate the model’s performance on a validation set.

CNNs may also not be the best choice for tasks that do not involve grid-like data, such as audio or time series data.

One of the famous CNN architectures is VGG16. 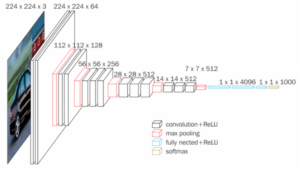 VGG16 is a deep CNN model that is trained on the ImageNet dataset, which consists of over 1  million images and 1000 classes of objects. It is composed of 16 layers, including 13 convolutional  layers and 3 fully connected layers. The convolutional layers are responsible for extracting features  from the input data, while the fully connected layers are responsible for making predictions based  on those features.

VGG16 is known for its strong performance on image classification tasks and has been widely used  as a baseline model in various research studies. It has also been used for tasks such as object  detection and image generation.

Despite its success, VGG16 is relatively resource-intensive and requires a large amount of computation to train. As a result, newer and more efficient CNN models have been developed in recent years.

Another CNN architecture is Alex Net.

AlexNet is a convolutional neural network (CNN) model developed by Alex Krizhevsky, Ilya  Sutskever, and Geoffrey Hinton in 2012. It was the first CNN model to win the ImageNet Large  Scale Visual Recognition Challenge (ILSVRC) and is known for its strong performance on image classification tasks.

AlexNet is a deep CNN model that is trained on the ImageNet dataset, which consists of over 1  million images and 1000 classes of objects. It is composed of 8 layers, including 5 convolutional layers, 2 fully connected layers, and 1 output layer. The convolutional layers are responsible for extracting features from the input data, while the fully connected layers are responsible for making predictions based on those features.  Join the best Data Science Classes in Pune. Learn different data science skills with the best trending database language in the market.

One of the key innovations of AlexNet is its use of rectified linear unit (ReLU) activation functions,  which significantly improved the training speed of the model compared to previous CNN  architectures that used sigmoid or tanh activation functions. AlexNet also introduced the concept of dropout, which helps to prevent overfitting by randomly setting a fraction of the weights to zero during training.

Despite its success, AlexNet has been surpassed by newer and more efficient CNN models in recent years. However, it remains an important milestone in the development of deep learning models and continues to influence the design of modern CNN architectures. AlexNet has been widely used as a  baseline model in various research studies and has also been applied to tasks such as object detection and image generation.

In conclusion, CNNs are a powerful tool for processing grid-like data and have achieved impressive results on a variety of tasks. While they have their limitations, they are likely to continue to play a  prominent role in the field of artificial intelligence and machine learning.