What is Apache Web Server? | SevenMentor 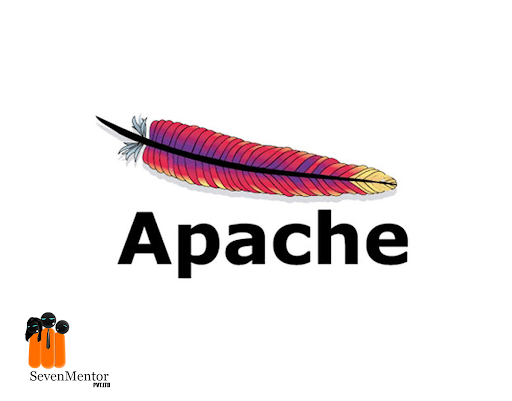 Apache HTTP Server is a free and open-source web server that serves web content over the Internet. Commonly known as Apache, it quickly became the web’s most popular HTTP client when it was developed. It is widely believed that Apache’s name came from its history of development and process of improvement with patches and modules applied, but this was corrected in 2000. It is revealed that the name comes from the Native American tribes’ reverence for its resilience and longevity.
Before we delve too deeply into Apache, let’s first discuss what a web application is and the standard architecture commonly found in web applications.

Apache is just one of the components required to serve web content in a web application stack. One of the most popular web application stacks includes LAMP or Linux, Apache, MySQL, and PHP.
Linux is an operating system that runs applications. Apache is a web server that processes requests and serves web assets and content over HTTP. MySQL is a database that stores all information in an easy-to-query format. PHP is a programming language that works with Apache to create dynamic web content.
Your actual stats may vary, but it’s safe to say that the majority of web applications run on some form of his LAMP stack because it’s easy to build and free to use. Web applications, in most cases, serve many different functions and purposes, but generally tend to have similar architectures and structures. Most web applications also benefit from firewalls, load balancers, web servers, content delivery networks, and database servers. The
firewall protects web applications from both external threats and internal vulnerabilities, depending on where the firewall is configured.
A load balancer helps distribute traffic between web servers that handle HTTP(S) requests (this is where Apache comes in) and application servers (servers that handle web application functions and workloads). There is also a database server that handles asset storage and backup. Depending on your infrastructure, you can run both the database and the application on the same server, but it’s best to keep them separate.

The Internet is made up of many different technologies, not all of which are created equal. Apache is arguably one of the most popular web servers on the web, but there are many other players and things are always changing. In the late 90s and early 2000s, Apache’s dominance was very strong, serving over 50% of the active websites on the Internet. Microsoft’s Internet Information Services (IIS) was also an option, but it was not very popular.
Apache still powers the majority of active websites today, but its share has shrunk from 50% to just under 40% since 2018, and NGINX is a relatively new player in the web server arena. is in second place with about 35. % and Microsoft IIS increased by 8-10%. The landscape is constantly changing as each year comes a new generation of web applications with new stacks and servers. SevenMentor is one of the best training institutes for the DevOps course in Pune.

Apache is considered open source software. This means you can freely browse and collaborate on the original source code. Because Apache is open source, it is very popular among developers who create and configure their own modules to apply specific functionality and augment core functionality. Apache has been around since 1995 and is responsible for being the core technology that helped drive the early growth of the early Internet.
One of the advantages of Apache is that it can handle large amounts of traffic with minimal configuration. Easily extensible and with modular functionality at its core, you can configure Apache to do what you want and do what you want. You can also remove unnecessary modules to make Apache more lightweight and efficient
The most common modules to add are SSL, server-side programming support (PHP), and load-balancing configuration to handle heavy traffic. Apache can also be deployed on Linux, macOS, and Windows. Learning how to configure Apache on Linux will help you manage Apache on Windows and Mac. The only differences are the directory paths and the installation process.

How Does the Apache Web Server Work?

Apache works as a way to communicate over a network from clients to servers using the TCP/IP protocol. Apache can be used for many different protocols, the most common being HTTP/S. HTTP/S or Hyper Text Transfer Protocol (S stands for Secure) is one of the leading protocols on the web, Apache being the best known protocol.
HTTP/S is used to define how messages are formatted and sent over the Internet, along with instructions to browsers and servers on how to respond to various requests and commands. Hypertext Transfer Protocol Secure normally runs on port 443, but is an unsecured protocol on port 80.
The Apache server is configured through a configuration file that uses modules to control its behavior. By default, Apache listens on requested IP addresses configured in the configuration file. This is where one of Apache’s many strengths comes into play. The
Listen directive allows Apache to accept and forward specific traffic to specific ports and domains based on requests for specific address and port combinations. By default, Listen runs on port 80, but Apache can bind to different ports for different domains, so many different websites and domains can be hosted on a single server.
domain1.com port 80, domain2.com port 8080, and domain3.com port 443 can all be monitored using HTTPS with Apache.
Notification or ACK messages are sent when a message reaches its destination or recipient. This effectively confirms to the original sender that the data arrived successfully. If there is an error in receiving data, or some packets are lost in transmission, the destination host or client should send a Not Acknowledged or NAK message and resend the data. to the sender.

The Apache web server is very popular, but it’s not the only web server on the market. Below are some Apache HTTP Server alternatives.