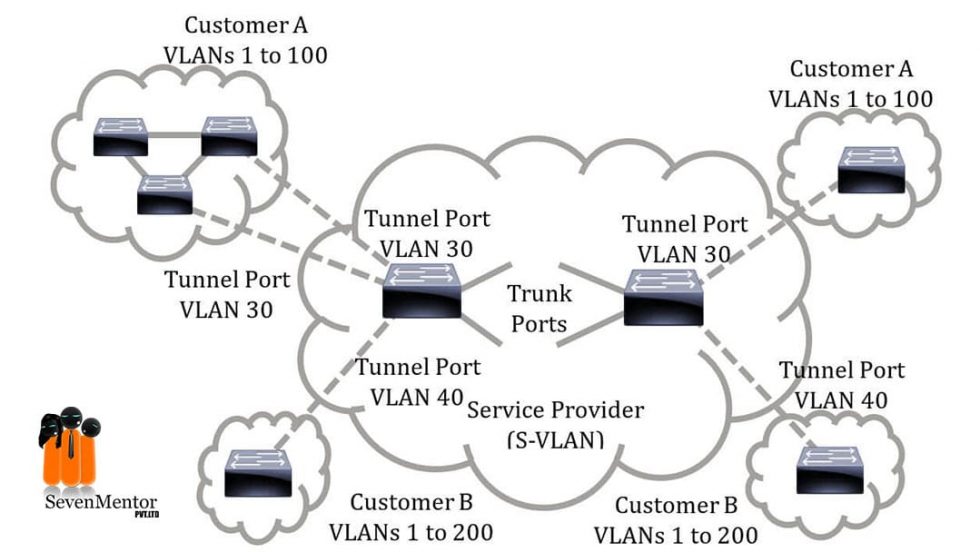 Hello friends, welcome back to my Networking Interview Questions Blog series. This is my fifth blog in this series. Before this, I covered interview questions on Basic Networking, Routing Part-I and Part-II, and Subnetting.  Now, in this blog, I am going to cover another domain of CCNA, the Switching interview questions, and answers. With this, I am also covering questions on a very interesting and useful topic in this switching domain i.e. VLAN.

So let’s start with Switching –

What is Switching?
Switching is a function to switch data frames between nodes on the same network.

Define Switch?
A Switch is a device that is used as a central device in Star Topology to connect multiple devices inside the Local Area Network (LAN). A switch examines each frame using source and destination MAC address and process it accordingly. Hence it works on Unicast rather than simply broadcasting the data. Switches operate at Data Link Layer (Layer Two) of the OSI model where they divide the collision domain.

Give the difference between a HUB, Switch & Router?
Hub is designed to connect hosts to each other in Star topology. Hub has no understanding of what it is transferring. When it receives data from a connected device, it broadcasts that data to all other ports regardless of the destination port. HUB operates at the first Layer (1- Physical Layer) of the OSI model. It is a non-intelligent network device.

Switch also connects hosts to each other like a hub in a Star Topology. But, Switch varies from a hub in the way it handles data. When a switch receives a frame, it determines what hosts the packet is intended for using the MAC address and sends it to that hosts only. It does not broadcast the packet to all the hosts like Hub, which means bandwidth is not shared and the network becomes more efficient. A switch operates at the second layer (2- Data Link Layer) of the OSI model.

A Router provides WAN connectivity. Unalike from a switch or hub, it connects two or more different networks using source and destination IP addresses. Its function is to route data packets to other networks, using the best route among all available routes. Routers operate at the third Layer (3- Network Layer) of the OSI model.

What is a MAC address table (MAT) and how a switch will build a MAT?
One of the functions of a Switch is to filter and forward the frames. To switch frames between LAN ports efficiently, the switch maintains an address table called MAT – MAC address Table or CAM – Content Addressable Memory Table.

By using the Source MAC address of the frames received, the switch dynamically builds this MAC address table. When the switch receives a frame, the source MAC address is learned and recorded in the MAT along with the port of entrance, timestamp, and VLAN. The switch then used this table to determine where to forward frames on a LAN.

What is Flooding?
The flooding will happen when a switch does not find any match for the destination MAC address in the MAC address table. In this situation, the switch will forward the frame to all of its ports except the port on which the frame was received.

What is a CD – Collision Domain and a BD – Broadcast Domain?
Collision Domain – It is a group of nodes such that if two or multiple nodes try to transmit data at the same time, it will lead to a collision after which those nodes must retransmit data, one at a time. This happens in a hub and repeater environment as each port is connected with the same link. Hence repeater and hub create a single collision domain.

If two nodes transmit data simultaneously without collision, then they are work in different collision domains. Hence, each port on a bridge, a switch or router is in a separate collision domain or in other words they create multiple Collison domains.

On-device level, Repeater, Hub, and Switch work in the same Broadcast domain by default. In contrast, the Router’s main property is that it does not forwards broadcast packets. And hence all ports on a router are in the different broadcast domains.

What is a VLAN and what are the advantages of VLAN?
A logical grouping of network nodes and resources connected to administratively managed ports on a catalyst switch is called a VLAN. Only Manageable or Catalyst switches support VLAN. No two VLANs can communicate i.e. VLAN separates the broadcast domain. So the broadcasted frames on the network will be only switched between the ports logically grouped within the same VLAN.

As VLAN is logically grouping the nodes, hence there is no need to change physical position or IP address. Broadcast traffic will reduce to a great extent. Along with this network security will also improve.

Access port – Access port belongs to and transmit the traffic of only one VLAN at a time. Any data frame received on an access port is simply supposed to belong to the VLAN configured on that port. As VLANs cannot communicate directly with each other, Access-link nodes cannot communicate with nodes outside their VLAN unless the packet is routed. Switches remove any VLAN information from the frame before it will have forwarded out to an access-link node. Hence any device attached to an access link is unaware of a VLAN membership.

Trunk Port – Trunk port is not belonging to any particular VLAN. It can transmit the data traffic of multiple VLANs simultaneously. Generally, a Trunk link is configured between the switch to switch or switch to the router. Switches add VLAN number to the frame before it will have forwarded out to a trunk-link. Trunk ports can transmit tagged traffic to configured VLAN and untagged traffic to native VLAN simultaneously.

What is Frame Tagging?
Frame tagging is a process that uniquely assigns a VLAN ID to each frame that will be forwarded out from the trunk link. When frame transmits between different switches or between switch and router for routing, this tagging is used to identify the VLAN that the frame belongs to.

What are the different types of Frame Tagging?
Frame Tagging Method has mainly two types, given as below:-
1.Inter-Switch Link (ISL)
2.802.1Q or dot1q
These methods are also called Frame Encapsulation Protocols.

Give the difference between ISL and 802.1Q?
Inter-Switch Link (ISL) – This is the Cisco proprietary protocol, which means unlike the other one, it can be configured only between Cisco switches. In the ISL method, 26 Bytes Header and 4 Bytes Trailer is added with Original Ethernet Frame.

802.1Q (dot1q) – This is an open standard protocol created by the IEEE (Institute of Electrical and Electronics Engineers). It can be used by any vendor’s switch. Compare to ISL, it is a Light Weighted Protocol.  In the dot1q method, only 4 Byte field is inserted within Frame’s Header.

What is Inter-VLAN Routing?
As we know, VLANs divide broadcast domains in a LAN environment. So, by default, only nodes of the same VLAN can communicate and there will no direct communication within the different VLANs.

What are Sub Interfaces on Router?
To support Inter-VLAN i.e. Dot1Q or ISL routing on a Fast Ethernet interface, the router’s interface is divided into logical interfaces—one for each VLAN. These are called subinterfaces and numbered according to the VLAN number.

Here I am concluding my first part of questions on Switching and VPN. We will meet soon with interview questions on STP, VTP, and EtherChannel. Till then, All the Best!!

IF you google for CCNA classes in Pune, you will definitely get SevenMentor in the topmost searches. Here we cover the CCNA global certification syllabus with hands-on practice on physical devices. We are the best CCNA training in Pune with 24*7 lab availability and extra exposure to the industrial requirements. In SevenMentor you can get classes for advance courses also like CCNA security training, CCNP training, CCIE training, SD-WAN training, Juniper training, and many more in other domains also like Microsoft, Linux, Cloud Computing.